It seems that every week a new way of targeting Android users with malware is discovered, and most often than not, Russian users are primary targets.

“Depending on the URL you click on and URL parameters, you might be prompted (in Russian) to install fake updates for a variety of products including the Opera browser and Skype,” Graham Cluley reports. “Or you might be presented with a page which prompts you to run a security scan on your phone.” 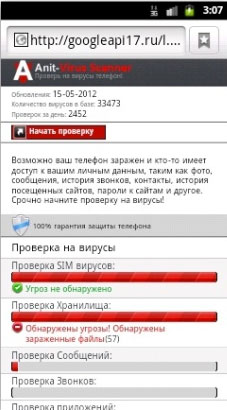 The scans are, of course, bogus, and the apps offered after them are as well.

They appear to be antivirus applications – and sometimes they even present icons stolen from legitimate security firms such as Kaspersky Lab – but most of the time are actually premium rate Trojans.

Also, if one is very unlucky, the downloaded Trojans also have the ability to download further malware onto the device.