While organizations are taking considerable steps towards BYOD adoption, network and bandwidth issues remain significant barriers for many.

The Aruba survey found that 69 percent of organisations polled allow some form of BYOD, whether that is strictly limited to internet connectivity or includes some access to corporate applications on employee-owned devices. 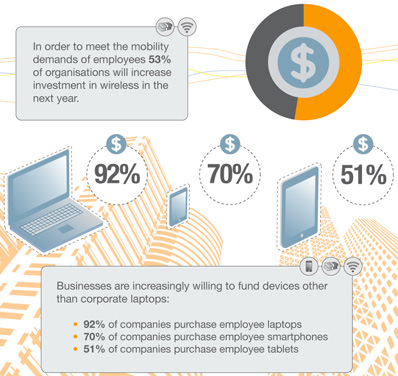 This reflects a shift from the blanket ban on consumer-grade devices that has been witnessed in previous years. However, just 22 percent of organisations polled have more than one in four employees bringing their own devices, suggesting that there is still a long way to go before the potential of BYOD is fully realised.

The survey also explored the impact that increased mobile market fragmentation has had on IT administrators, who must now cater to a plethora of different manufacturers and operating systems. Not surprisingly, Apple was the smartphone and tablet manufacturer of preference for 88 percent and 86 percent of respondents respectively.

Samsung was not far behind with 67 percent and 51 percent respectively preferring Samsung smartphones and tablets.

Despite the undeniable success of BYOD so far, a third of respondents surveyed said their organisations still ban employees from connecting their own devices to corporate networks. As with many emerging trends, security is at the heart of this – 70 percent of organisations surveyed found that ensuring a secure connection is the main barrier to full adoption of BYOD, while 45 percent of organizations surveyed are held back by how to enforce access rights based on user, device and application type.

In addition to the security issues that companies face, there is the issue of providing sufficient network resources to support the influx of so many multimedia-rich devices. This was the case for 35 percent of respondents, who claimed that providing enough wireless coverage and capacity for BYOD was a primary technical challenge.

This inevitable strain on the network has unsurprisingly led many enterprises to seek a well-planned mobility strategy with strong underlying technology that is able to satisfy the demands of employees – with almost two thirds of respondents planning to increase their investment in wireless during the coming year.

The results of the survey strongly suggest that companies are realising that BYOD is an issue that must be addressed. However, while many organisations are taking considerable strides, there is still some way to go. Working habits are changing, and more companies must assess the business case for the move towards a mobility-centric network that replaces archaic infrastructures that simply cannot satisfy the demands of the modern day workforce.