A new Dimensional Research and ZoneAlarm report found that 18 – 25s are more confident in their security knowledge than 56 – 65s, but have experienced more security issues in the past two years compared to older users. 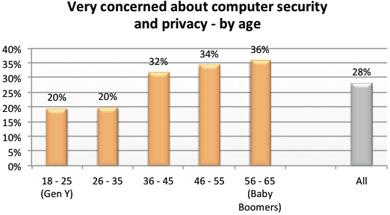 78% of 18 – 25s respondents do not follow security best practices, while cybercriminals are launching new and more sophisticated attacks on consumers. In comparison, 56 – 65s are more concerned about security and privacy and are twice as likely to protect their computers with additional security software.

“Growing up in the digital age, 18 – 25s may appear to be a more tech-savvy generation, but that does not translate into safer computing and online practices,” said Tomer Teller, security evangelist and researcher at Check Point Software Technologies. “The ZoneAlarm Study reveals that they are the most at-risk group, and prone to cyber-attacks. That makes this group even more vulnerable to online security threats.

“Younger users tend to prioritize entertainment and community over security, perhaps due to overconfidence in their security knowledge. For example, they’re more concerned about gaming or other social activities than their online security. They also have less sophisticated security software, and hence, have reported more security problems than other groups.”

Computer security increases in priority with age: Only 31% of 18 – 25s rank security as the most important consideration when making decision about their computers in comparison to 58% of 56 – 65s. 18 – 25s prioritize entertainment and community above security.

“Financial fraud is one of the main driving factors for cybercriminals these days. They are targeting consumers and not just looking to hack into one computer. They seek to use their victims’ PCs to spread attacks and infiltrate a whole community, including family, friends and work,” said Bari Abdul, VP and Head of Check Point’s Consumer Business, ZoneAlarm. “Online attacks spread rapidly now that we’re connected more than ever before through social media. It is imperative that consumers, especially 18 – 25s, adopt security best practices, and protect their computers with adequate security, which includes at a minimum antivirus and a two-way firewall.”