In a new study, Barracuda Labs analyzed a random sampling of more than 70,000 fake Twitter accounts that are being used to sell fake Twitter followers.

They also analyzed some of the people that are using such fake followers including the recent example of U.S. presidential candidate Mitt Romney‘s Twitter account. 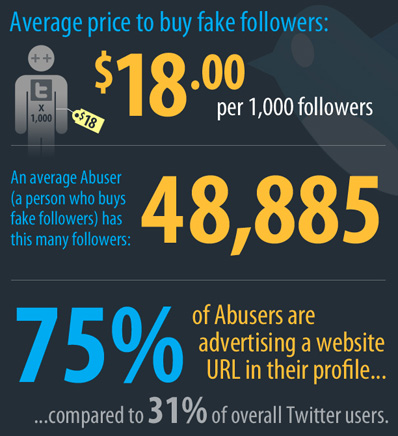 Between Facebook’s 10-Q filing stating that 83 million of its accounts are fake, to Mitt Romney’s Twitter account recently falling under scrutiny for suspicious followings, fake social network profiles are a hot topic at the moment. And these fake profiles are at the center of a very vibrant and growing underground economy.

This underground economy consists of dealers who create and sell the use of thousands of fake social accounts, and Abusers who buy follows or likes from these fake accounts to boost their perceived popularity, sell advertising based on their now large social audience or conduct other malicious activity.

“Fake users should be a huge concern to both Facebook and Twitter because of the threat they create to user trust, online security and the overall community feeling of the social networks,” said Dr. Paul Judge, chief research officer at Barracuda Networks. “This obviously threatens advertising revenue as organizations begin to question the true visibility and reach of their ad campaigns.”

Highlights of the study include:

Dealers are everywhere: There are 20 sellers on eBay and 58 websites out of the Google Top 100 search results that are selling fake Twitter profiles.

Due to the current public discussions about Mitt RomneyÃ‚Â´s Twitter account and his fake followers, Barracuda Labs took the opportunity to analyze them. This led to several interesting findings:

The results of the analysis closely fit the “fake user” profile and allow the assumption that most of these recent followers of Mitt Romney are not from a general Twitter population but most likely from a paid Twitter follower service.