Users are aware of the dangers in the Internet and most of them are already using a security solution, say the results of AV-Comparatives’ annual survey that polled 4,715 computer users from around the world.

The majority – 4 out of 5 – runs Windows 7 or 8 on their computers. Android and Symbian are the most popular choices for mobile devices / OS, while Firefox and Chrome users account for nearly 75 percent of the total polled.

A little over half of the respondents are using paid security solutions, which is a lesser percentage when compared to results in previous tests. While users in Europe and Asia are more likely to opt for paid-for solutions, the Americas count more users opting for free ones. Only 3 percent of the respondents admitted not using a security product to protect their machines.

“The 12 most commonly used manufacturers of the products in the world are (in this order): Avast, Kaspersky, AVIRA, ESET, Microsoft, Symantec, Bitdefender, AVG, F-Secure, McAfee, Trend Micro and Panda,” claims the report.

Users are expectedly more concerned with the ability of the solutions to protect against malware (72,2 percent) than their impact on system performance (27,3 percent). Still, nearly 70 percent are not good at letting manufacturers know when a product misses a virus or raises a false alarm.

The five things they consider most important in a security product are:

When asked what should AV vendors try to improve more, the list was practically repeated, with lower impact on system performance ending in first place (click on the screenshot to enlarge it): 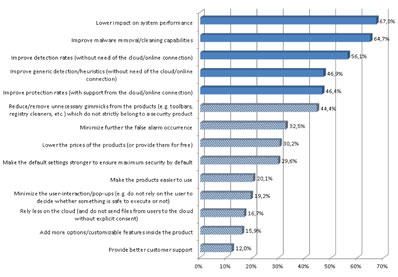 Finally, the testing labs users trust most are AV-Comparatives, Virus Bulletin and AV-Test, and reviewers/reviews from CNET, PC World, Computerworld and PC Mag.

“Reviews on Amazon and YouTube were regarded as the least reliable, probably because they are largely provided by users who are effectively anonymous,” the report explained.

“Whilst some reviewers may write competent articles with integrity, other writers may base their opinions on e.g. a one-off bad experience with a particular product, or deliberately deceive readers in order to promote a product they have a commercial interest in, or to malign competitors. The same applies to reviews on forums.”