Most drive-by exploit kits use a minimal exploit shellcode that downloads and runs the final payload. This is akin to a two-stage ICBM (InterContinental Ballistic Missile) where the first stage, the exploit, puts the rocket in its trajectory and the second stage, the payload, inflicts the damage.

In the cybercrime world, the de-coupling of the first stage from the payload is designed to make sure that an exploit kit is as generic as possible and can deliver all possible payloads, provided that the payloads only need native execution (either as a standalone executable – files with an “.exe” file extension, or DLL registration via RegSvr32 – files with a “.dll” extension).

We recently found that a Java exploit kit called “g01pack’ has added another “mid-course’ stage, turning the infection process into a multi-stage attack. The first stage of the attack, the exploit shellcode, executes a second stage, in which a Java class runs in a separate Java process. This second Java process then downloads and runs the final payload. We believe this discovery represents the first instance of an exploit kit delivering its payload via a multi-stage attack.

Why would an attacker need a multi-staged exploit? To use the ICBM analogy; much like the way an ICBM uses multiple stages to obtain a longer range, the attacker uses multiple stages to distance the attack launch site from its final destination. By utilizing an extra stage, the attack is more likely to bypass some security products: the initially exploited process (Java) launches another Java process (second stage) that appears less suspicious, and only that second stage process runs the final, native payload (the persistent malware dropper).

This is supported by the analysis we performed using various security tools and the poor detection rate we observed: Out of 46 tools tested (in file scanning mode) only eight tools identified the first stage JAR as malicious, and only two identified the second stage class (cabOrgies.class) as malicious.

We observed this multi-staged exploit approach in one of the vulnerabilities exploited by the “g01pack’ exploit kit – the well-known Java vulnerability CVE-2012-1723 (which dates back to mid-2012). This vulnerability allows the exploit to break out of the Java sandbox. It has long since been patched by Oracle, but apparently there are enough unpatched targets to make this attack worthwhile. 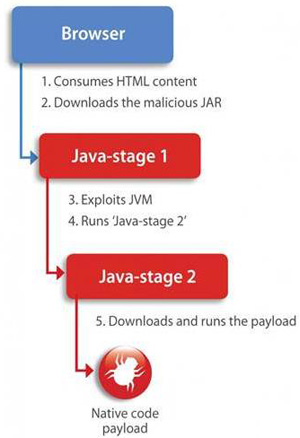 Although the Java exploit we researched is part of the g01pack exploit kit, it is interesting to note that some implementation details are similar to the exploit used by BlackHole for CVE-2012-1723, identified in mid-2012 (described in a Symantec blog). The BlackHole approach, however, was a typical “exploit-payload” scheme, not the “exploit-intermediate process-payload” scheme we see here.

The final payload is, of course, malware – we noticed many malware families being distributed by this specific exploit kit – Zeus, Torpig, Gozi, Shylock, and there are most likely many others. The exploit kit is used to infect targets globally, with the current infection rate estimated at 1:3,000 machines per month (payload executions from this exploit kit alone!). This very high infection rate proves the effectiveness of this multi-stage approach. Therefore, it is highly likely that other exploit kits will incorporate a similar approach.

For example, the Applet tag would be:

This instructs the browser to launch Java (the “javaw.exe” process) with the JAR URL (in our example the “[example].jar” is located in the same host and folder originally accessed by the browser), the class name (package “critical”, class “securityupdate”), and the parameters (in our case “date” whose value is a long encrypted string, representing the URL of the final payload).

Java then retrieves the JAR URL and invokes the Applet class from the package.

Java starts by running the init() method of the applet class “securityupdate.” This function first ensures that it is running on a Windows platform, and that the JRE version is not “1.7” (i.e. it ensures it does not run on Java 7; in fact the exploit will succeed only for Java versions 6u10-6u32 inclusive). Next, the function uses the Java class “entry” to exploit CVE-2012-1723 and escape out of the Java sandbox. A patch for this vulnerability is available, but apparently there are still enough unpatched Java 6 installations to make it a valuable target for exploit kit writers.

A successful exploitation results in running the method “JiXU” of class “keaVestAltho” with high privileges. This method contains a hard-coded encrypted string which represents the “in memory’ class “remoterEhPoplin.” The method decrypts the string, creates the class from it and invokes the class constructor with 3 arguments: the Applet’s “date” parameter, the Applet’s “guid” parameter, and a byte array representing the second stage class “cabOrgies” (which the method copied into memory from the corresponding JAR resource).

The constructor for class remoterEhPoplin (the “in memory” class) has the following flow: 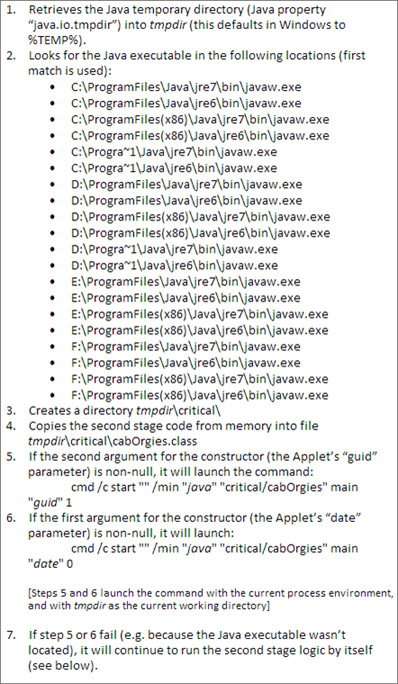 As you can see, in steps 5 and 6, the Java process launches another new Java process with (a copy of) the second stage class. Note that the “date” and “guid” parameters of the Applet tag (which contain the payload URL in an encrypted form) are transferred as-is in the Java invocation command line. The EXE/DLL indicator becomes the third parameter (set to “0′ for EXE or “1′ for DLL).

For the example above, the following command will be executed:

This launches Java (javaw.exe) in a new, minimized window with an empty title.

A new Java process is launched with the working directory set to %TEMP%. This directory includes a package (folder) called “critical” which includes a class file called “cabOrgies.”

The Java process is launched with four command line arguments: “critical/cabOrgies”, “main” (ignored), the encrypted URL and an EXE/DLL indicator. This instructs Java to invoke the main() method of the class cabOrgies found in %TEMP%\critical/cabOrgies.class with a string array containing the following three command line arguments (“main”, the encrypted URL, and the EXE/DLL indicator).

It follows this workflow: 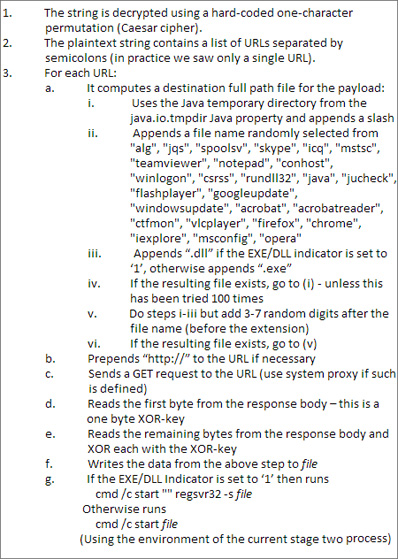 As you can see, step 3.g runs the final payload.

In our example, the encrypted URL string is decrypted into:

But the host name no longer has a DNS resolution (hardly surprising).

The Java code in both stages is heavily obfuscated. Four different obfuscation methods are applied (some of them probably via an obfuscation tool):

The obfuscation instances change rapidly and it’s quite common to see two to three different versions in a single day, so, we don’t expect to see “cabOrgies” a few days from now. Some names change more slowly. For example, the package name used to be called “oracle” in early April, and for the last few weeks it’s called “critical.”

“g01pack’ is among the most successful exploit kits available today. It executes a “drive-by download’ attack that results in the silent installation of malware. Using the multi-staged attack the “g01pack’ exploit kit can effectively distribute advanced malware evading detection by existing security controls.

Trusteer Apex blocks this attack by stopping the exploit process and preventing the payload from compromising the endpoint.

I’d like to thank Assaf Friedman from Trusteer’s security group for his help collecting the data for this article.