Despite repeated warnings, a majority of organizations are failing to enact recommended best practice security policies around one of the primary targets of advanced attacks – privileged accounts.

According to the results of Cyber-Ark Software’s global IT security survey, 86 percent of large enterprise organizations either do not know or have grossly underestimated the magnitude of their privileged account security problem, while more than half of them share privileged passwords internally. 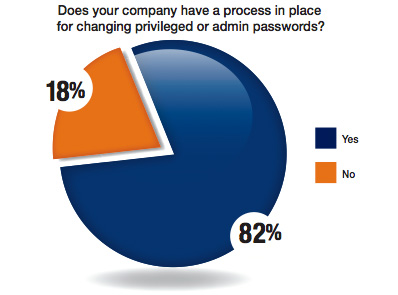 Privileged accounts have emerged as the primary target for advanced enterprise attacks and have been exploited to perpetrate some of the most devastating cyber-attacks and data breaches in recent memory, including those occurring at Saudi Aramco, South Korea, Global Payments, the South Carolina Department of Revenue, and the U.S. Department of Energy, among others.

Privileged accounts consist of privileged and administrative accounts, default and hardcoded passwords, application backdoors, and more. These accounts act as a gateway to an organization’s most sensitive data, which is accessible across systems, applications and servers. Despite the repeated abuse of privileged accounts in cyber-attacks, organizations continue to have a difficult time identifying and managing these critical vulnerabilities.