A U.K.-based security researcher has shared details of a recently patched Facebook vulnerability that he discovered and for which he received $20,000 via the the social network’s bug bounty program.

Jack Whitton (aka “fin1te”), who’s also a regular submitter to Google’s and Etsy’s bug bounty programs, has found a simple but critical bug that allowed attackers to gain access and take over random Facebook accounts by sending an SMS.

The attack relies on the fact that many users have a mobile number linked to their Facebook account, and that they can use the number instead of their email address to log into it.

“The flaw lies in the /ajax/settings/mobile/confirm_phone.php end-point. This takes various parameters, but the two main are code, which is the verification code received via your mobile, and profile_id, which is the account to link the number to,” he explained in a blog post. “The thing is, profile_id is set to your account (obviously), but changing it to your target’s doesn’t trigger an error.” 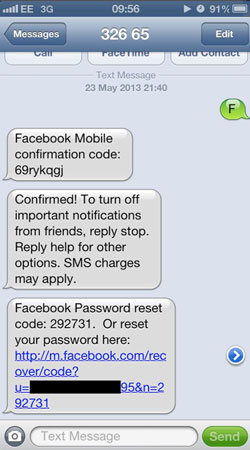 According to the researcher, Facebook confirmed the receipt of the report some 5 days after he had reported the bug in late May, and has fixed the flaw on the same day by making it so that the profile_id parameter from the user is no longer accepted.