An unusual Android Trojan has been recently unearthed by McAfee’s researchers, embedded in a pirated version of a legitimate music app.

The app in question is Jay Z Magna Carta, which has ben recently made available on Google Play, and allows users of certain Samsung devices to listen to the rapper’s new album on July 4, three days before the album comes out and the rest of the world can hear it.

The trojanized version has been offered for download on third party sites, and once installed and run, it doesn’t give any indication that it might be malicious. Nevertheless, it works furiously in the background: it tries to download and install additional malware and attempts to send device info to a remote server each time the phone is restarted.

But on Thursday, July 4, users might notice that the app is not what it purports to be. The date triggers the app to replace the wallpaper on the infected device with an image of President Obama that apparently comments on recent surveillance scandal in the US, and to start a “NSAListenerService”: 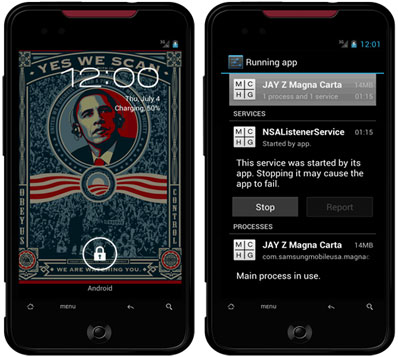 “The image and the service name NSAListener suggest a hacktivist agenda, but we haven’t ruled out the possibility that additional malware may target financial transactions or other data,” the researchers say.

“Based on the political message and the fact that it was embedded in an app that coincides with the release of Jay Z’s latest album, we suspect the Trojan was recently introduced into the wild,” they concluded, and urged users to always be careful when downloading apps from unknown or untrustworthy sources.