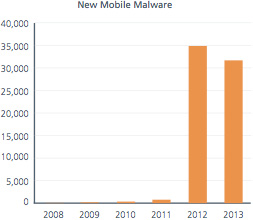 McAfee Labs registered twice as many new ransomware samples in Q2 as in Q1, raising the 2013 ransomware count higher than the total found in all previous periods combined.

The second quarter also saw a 16 percent increase in suspicious URLs, a 50 percent increase in digitally-signed malware samples, and notable events in the cyber-attack and espionage areas, including multiple attacks on the global Bitcoin infrastructure and revelations around the Operation Troy network targeting U.S. and South Korean military assets.

Fraudulent dating apps. McAfee Labs discovered a surge in dating and entertainment apps that dupe users into signing up for paid services that do not exist. Lonely users attempt to access potential partners’ profiles and other content only to become further frustrated when the scam is recognized. The profits from the purchases are later supplemented by the ongoing theft and sale of user information and personal data stored on the devices.

Trojanized apps. Research revealed the increasing use of legitimate apps altered to act as spyware on users’ devices. These threats collect a large amount of personal user information (contacts, call logs, SMS messages, location) and upload the data to the attacker’s server.

“The mobile cybercrime landscape is becoming more defined as cybergangs determine which tactics are most effective and profitable,” said Vincent Weafer, senior vice president, McAfee Labs. “As in other mature areas of cybercrime, the profit motive of hacking bank accounts has eclipsed the technical challenges of bypassing digital trust. Tactics such as the dating and entertainment app scams benefit from the lack of attention paid to such schemes; while others simply target the mobile paradigm’s most popular currency: personal user information.”

Beyond mobile threats, the second quarter revealed the continued adaptability of attackers in adjusting tactics to opportunities, challenges to infrastructure upon which commerce relies, and a creative combination of disruption, distraction and destruction to veil advanced targeted attacks:

Ransomware. Over the past two quarters McAfee Labs has catalogued more ransomware samples than in all previous periods combined. The number of new samples in the second quarter was greater than 320,000, more than twice as many as the previous period, demonstrating the profitability of the tactic.

Suspicious URLS. The second quarter’s increase in suspicious URLs shows how important “infected” sites remain as a distribution mechanism for malware. At June’s end, the total number of suspect URLs tallied by McAfee Labs reached 74.7 million, which represents a 16 percent increase over the first quarter.

Attacks on Bitcoin Infrastructure. The sudden activity in the Bitcoin market over the course of the past quarter attracted interest from cybercriminals. In addition to disruptive distributed denial of service attacks (DDoS), the group infected victims with malware that uses computer resources to mine and steal the virtual currency.

Operation Troy. McAfee Labs uncovered evidence suggesting that attacks on South Korean banks and media companies in March and June of this year were in fact connected to an ongoing cyber espionage campaign dating back to 2009. A study of forensic evidence suggested that the campaign was designed to target U.S. and South Korean military systems, identify and remove confidential files, and, when necessary, destroy the compromised systems through a master boot record (MBR) attack.