A lot has been said and written about the long-lasting TDSS (or TDL) and the considerably newer ZeroAccess (or Sirefef) rootkits, and the similarities between the two have been noticed before, but Trend Micro researchers have discovered something that might indicate direct ties exist between the two malware families.

Both TDSS and ZeroAccess have well-documented rootkit capabilities. Both use peer-to-peer communication techniques and the traffic they send is encoded using base64 and padded with garbage characters. Both have one main goal: click fraud.

It’s also interesting to note that ZeroAccess has been known to disable TDSS if it discovers it on a computer it compromised, which would seem to imply the two rootkits (and the gangs propagating them) are rivals.

But now researchers have learned that an older version of ZeroAccess and some newer versions of TDSS have been using the same domain on the very same day. 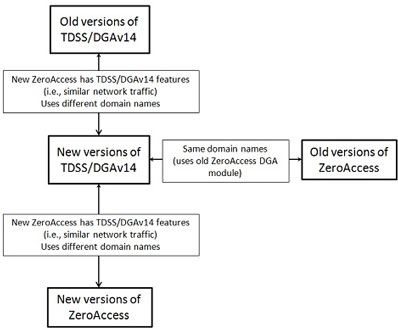 “We believe that the domain generation algorithm module used by older ZeroAccess malware has now been adapted by TDSS specifically the DGAv14 variants,” they say, but point out that this does not necessarily mean that the cybercriminals responsible are directly collaborating.

“The DGA module may have been acquired from a third party, and/or TDSS may be making money by hosting parts of ZeroAccess,” they posit. Nevertheless, the discovery makes them believe that there are some ties between the two malware families.