A very convincing phishing attempt aimed at harvesting users’ Google account credentials has been spotted by a security researcher (click on the screenshot to enlarge it): 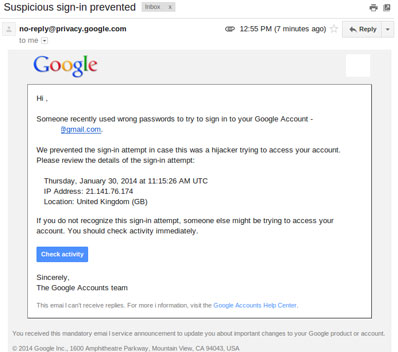 The email takes the form of a notice from Google, saying that a suspicious sign-in attempt has been prevented, and urging users to check the account activity.

The email is equipped with the Google logo, and comes from a spoofed email address that can trick undiscerning users into believing that it was actually sent by the company.

The link leads to a domain that also at first glance looks like it belongs to the Internet giant, and which sports a spoofed login page.

Unfortunately for those who believed the ruse, the information they entered has been harvested by the crooks behind this scheme. If you are one of them, go to the legitimate Google login page and, if you can still log in, change your password – preferably to something long, complex and difficult to guess.

This particular phishing page has been made unavailable in the meantime, but that doesn’t mean that others won’t be used in its stead, so it’s wise to always be on the lookout for similar phishing attempts.