2013 was a year of change in the world of mobile threats. Campaigns became increasingly targeted as criminals adapted their practices to maximize profit and operate under the radar. In places where regulation is tough, criminals dropped more traditional monetization strategies like premium rate SMS fraud and leveraged “grey area” tactics that are actually legal. 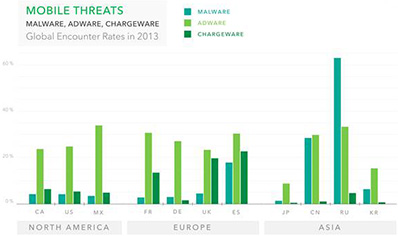 After years of iterating and incrementally changing code and tactics, in 2013 patterns became clear in the mobile threat industry. Forced to compete while working to evade detection by law enforcement or security companies – mobile criminals started to specialize.

Allowed to spread unchecked, Adware reached a pinnacle in 2013, spreading to every corner of the globe. You are five times more likely to encounter adware than you are malware. In September, Google updated the Play Store terms and conditions, removing around 36,000 apps containing ad networks which broke the rules. The impact was immediate. In Q3 of 2013, adware rates began to fall.

Snapshot of Encounter Rates for Mobile Threats in the U.S.