The forum database of Web TV service Boxee.tv has been ransacked and the attacker made off with – and has subsequently made available for download – a dump containing personal and account information of over 158,000 of its users.

“The leak was announced on a private forum and the database information has been uploaded to a TOR service in the format of a raw SQL dump extraction totaling 792 MB and containing an impressive 192 tables,” Risk Based Security revealed on Sunday.

“Any message sent through their service, including ones with sensitive content, are now public. Further, the passwords were apparently salted hashes and easily cracked according to sources,” they added.

The breach and information theft was executed by a yet unknown attacker who obviously has a vendetta going against reporter Brian Krebs.

He or she has advertized the breach and offered a link to the dump on Boxee’s own forums, and has included some of Krebs’ personal information in the message: 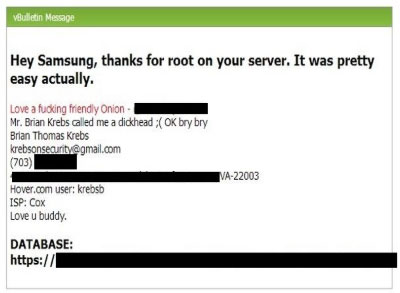 Although, it seems that this info wasn’t extracted from the compromised database – HaveIBeenPwned? has incorporated the Boxee dump in its database, and it doesn’t contain Krebs’ information.

Boxee, which was acquired last year by Samsung, has yet to confirm the breach, but on Tuesday password management service LastPass started warning its customers of it and urging them to update their password for their boxee.tv account immediately.