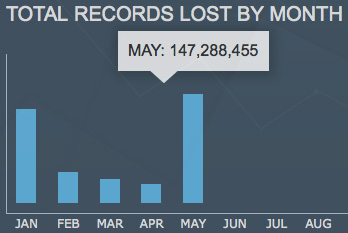 The retail industry had more data records compromised than any other industry during the second quarter, with more than 145 million records stolen or lost, or 83 percent of all data records breached. Less than one percent of all 237 breaches during the second quarter were secure breaches where strong encryption or authentication solutions protected the data from being used.

“The numbers are pretty staggering. 175 million-plus records stolen in the second quarter means that data theft is happening at a rate of 80,000 records per hour. And until we start to do things differently it will probably keep on rising. Doing the same thing and expecting different results when it comes to your security strategy will continue to have painful outcomes,” Tsion Gonen, Chief Strategy Officer, SafeNet, told Help Net Security.

“Businesses need to start thinking beyond PLAN A of “how do I prevent a breach’ and add a plan B which focuses on minimizing the impact of consumer data loss. For example, using encryption to deem the data useless. It seems that if consumers don’t start to demand that companies pay the price for these breaches, the current data breach epidemic likely will never end,” Gonen added.

Highlights from the second quarter Breach Level Index from SafeNet include: