The developer preview release of Windows 9 is scheduled to be publicly available this September, and cyber crooks have already started peddling bogus versions of the announced OS.

Trend Micro researchers have spotted a slew of scams using Windows 9 as a bait. 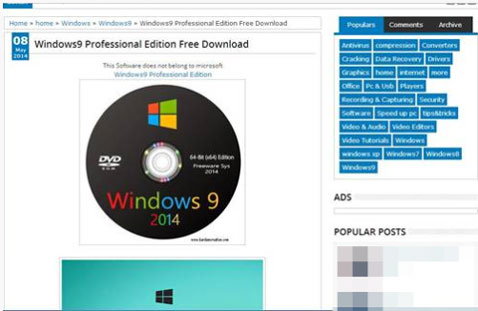 “Windows9 Professional Edition Free Download,” says one malicious website. Clicking on the offered link leads the user to a download page at the file-hosting service Turbobit.net.

When starting to download the offered 5.11 GB file, the user is also urged to install a video player dubbed Video Performer or a “new Video Update”. The file in question turns out to be adware that also downloads and executes additional files (grayware).

“Upon further analysis, the 5.11 GB file instead downloads a reskinned Windows 7 SP1 64-bit bundled with a handful of software utilities, rather than a “leaked’ copy of Windows 9,” the researchers shared. “The default language setting for the installation is Portuguese (Brazil).”

Another malicious offer of the same kind is being peddled via a YouTube video page, which offers a link to two files: one that purportedly installs the OS, and another that poses as a key generator. Both are not what they seem and install grayware on the victims’ computer.

“Other threats that we’ve spotted at the time of this writing involve blogs with similar content, but instead of grayware, their payloads mostly involve redirecting to phishing scams that go after the user’s mobile phone number,” the researchers noted.