If you like the convenience of Skype, but you are worried about government surveillance and don’t trust Microsoft to keep you safe against it, Tox might be just the thing for you.

Tox is a free and open source peer to peer messaging application that aims to replace the popular Microsoft’s VoIP and IM service. Tox is actually the name of the program’s core, which handles the messages and the encryption, and to use it one needs to download a client for the platform they use. Not all clients have the same features, but the main desktop ones support messaging, video and audio chat. 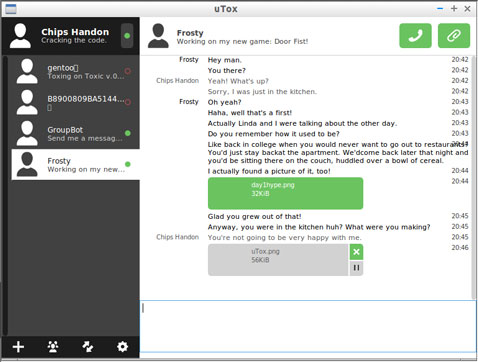 In a recent report by Wired, David Lohle, a spokesperson for the Tox project, explained its inception.

It all started on 4chan, in the wake of Edward Snowden’s revelations about NSA’s spying activities, which implicated Microsoft as a “collaborator” of the US intelligence community. A group of members of the site’s tech forum began discussing the creation of a Skype alternative that will not be susceptible to surveillance efforts.

In order to do this, Tox needs not central server to exchange the messages – users are connected directly to one another. Also, the messages and calls – and any other data (e.g. files) you send or receive – are encrypted.

Naturally, as the project is still in progress, there are still some missing features, but the team is working on it.

The developer team has been recruited from 4chan, reddit, and hacker news, and is working on the project for free. The Tox core and the clients will not be monetized, says Lohle.

Give that Tox code is open source, anyone can review it and search for security bugs, and propose changes. When the project reaches a stable state, they plan to hire an independent security firm to audit the code in order to fix problems and reassure users. In the current state, it would be unwise for users to expect total security.