Security related topics are often front and center in the 24-hour news cycle, but what concerns Americans the most? According to a new national survey from University of Phoenix College of Criminal Justice and Security, identity theft (70 percent) and personal cybersecurity (61 percent) are the security issues of greatest concern.

These fears may be grounded in experience as nearly two-in-five (39 percent) have suffered a personal security breach, such as identity theft, unauthorized use of credit card information or email/social media account hacking.

Only 12 percent of Americans feel generally more secure than they did five years ago, while 41 percent feel equally secure and nearly half (47 percent) feel less secure. At least half of Americans are more concerned about personal cybersecurity (61 percent), identity theft (60 percent) and national security (50 percent) than they were five years ago. 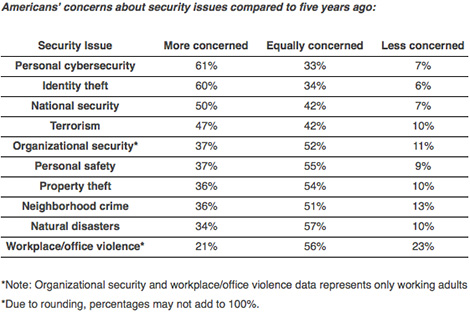 When it comes to workplace security issues, working adults are most confident in their companies’ abilities to screen new employees, with 59 percent saying their employers are completely or very prepared to address this issue. Natural disasters (35 percent), workplace violence (41 percent) and business espionage (41 percent) are the three security issues that workers think their employers are the least prepared to address.

The U.S. security industry is a $350 billion annual market, with millions of jobs that span nearly every sector of the global economy. The industry is growing exponentially, creating more opportunities every day.

Opportunity and interest in this sector seem to align. In fact, according to the survey, 42 percent of working adults have either worked in security, law enforcement or other criminal justice-related fields or have some level of interest in these careers.

More than a quarter (27 percent) of working adults have never worked in security fields, but have some interest in doing so, with 10 percent saying they are interested and another 17 percent saying they would consider it. Six percent of working adults are employed in these fields now and 9 percent previously worked in these fields. Examples of jobs in security fields include cybersecurity, corporate security planning, law enforcement, Homeland Security, risk management, emergency management, information security, corrections and court system positions.

The survey was conducted online within the United States by Harris Poll on behalf of University of Phoenix among 2,014 U.S. adults (aged 18+) between August 1-5, 2014. Of those, 1,034 are full/part-time or self-employed.