A growing number of flaws in web browsers is viewed as the biggest endpoint security headache by today’s IT decision-makers, according to Malwarebytes. 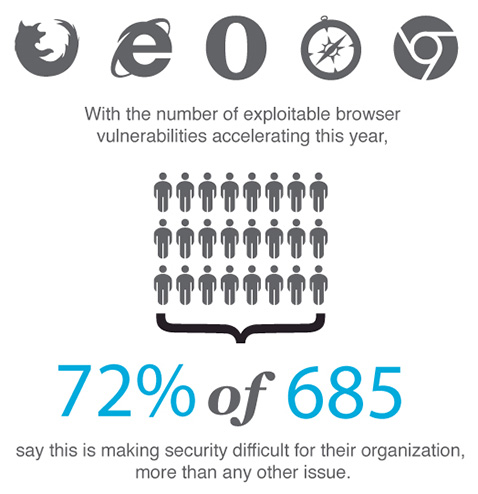 With the number of exploitable browser vulnerabilities accelerating this year, 72% of the 685 IT decision-makers questioned said this made security difficult in their organization, more so than any other issue. Those at companies with 1000+ endpoints were particularly wary of this issue.

The research also shows that a staggering 82% of all companies have experienced at least one online attack in the last year alone. This is supported by a worrying trend for multiple attacks, with the average company being subjected to three, all of which took a severe toll on help desks and employee productivity.

In addition, the survey outlines growing concerns around traditional security suites. An overwhelming majority of respondents, 84%, agreed that traditional anti-virus has become less effective in the face of modern threats. This has seemingly forced those in charge of security budgets to consider a layered approach, with 78% of businesses questioned planning to deploy multiple endpoint solutions by the end of 2015.

The threat from ransomware to the enterprise environment was shown to weigh heavily on the minds of those whose businesses were infected. Despite being the least prevalent specific threat in terms of overall numbers, those who did experience ransomware rated it as most severe in terms of impact, beating even APTs.

“It’s sobering to see such a large number of companies suffering from attacks,” said Marcin Kleczynski, CEO of Malwarebytes. “The growing concerns over browser vulnerabilities are a particularly notable trend, speaking volumes about their effectiveness as an attack method. Given the ever-advancing threat landscape, it should be obvious by now that an endpoint security strategy built around a single traditional anti-virus solution isn’t enough.”

“By employing a layered approach that uses an advanced endpoint security solution, organizations can better protect their data and reduce help desk time, which will positively impact their bottom line,” Kleczynski added.
The research also determined that enterprise IT teams still discern the largest impact from such threats to be the increased time spent at help desks, with 64% saying this was the biggest issue, followed closely by lost employee productivity.