28.8 percent of phishing attacks last year aimed to steal financial data from consumers, according to a new report by Kaspersky Lab. The results show how cybercriminals have shifted their focus from banks to payment systems and online shopping websites. 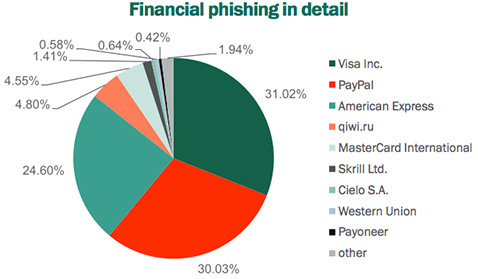 In the Payment Systems category, cybercriminals mostly targeted data belonging to users of Visa cards (31.02 percent of detections in this category), PayPal (30.03 percent) and American Express (24.6 percent). At the same time, in 2014 detections for phishing pages mentioning PayPal saw their share fall by 14.09 percent compared to 2013.

Amazon remained the most commonly-attacked brand in the Online Shopping category – 31.7 percent of attacks in this category used phishing pages mentioning the popular Internet-based retailer. However, this is 29.41 percent less than in the previous year.

“The rise in financial phishing that we saw in the past has naturally drawn a response from the brands most frequently abused in phishing scams – they are beginning to tackle phishing distribution channels, especially email spam, more actively. That leads to a reduction in the levels of phishing that targets some of the larger brands. However, cybercriminals immediately responded by targeting new “markets.’ For example, in 2014 we saw a large number of phishing scams based on websites that sell plane tickets. These are targets that used to be seen fairly infrequently in phishing scams,” said Nadezhda Demidova, web content analyst at Kaspersky Lab.