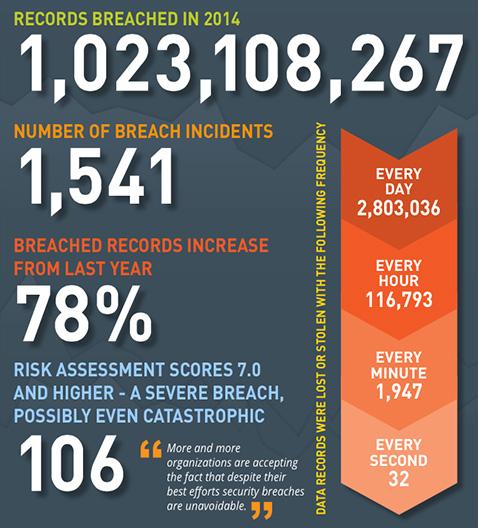 The main motivation for cybercriminals in 2014 was identity theft with 54% of the all data breaches being identity theft-based, more than any breach category including access to financial data. In addition, identity theft breaches also accounted for one-third of the most severe data breaches categorized by the BLI as either Catastrophic (with a BLI score of between 9.0 and 10) or Severe (7.0 to 8.9). Secure breaches, which involved breaches of perimeter security where compromised data was encrypted in full or in part, increased to 4% from 1%.

“We’re clearly seeing a shift in the tactics of cybercriminals, with long-term identity theft becoming more of a goal than the immediacy of stealing a credit card number,” said Tsion Gonen, Vice-President of Strategy for Identity and Data Protection at Gemalto. “Identity theft could lead to the opening of new fraudulent credit accounts, creating false identities for criminal enterprises, or a host of other serious crimes. As data breaches become more personal, we’re starting to see that the universe of risk exposure for the average person is expanding.”

In addition to the shift toward identity theft, breaches also became more severe last year with two-thirds of the 50 most severe breaches according to their BLI score having occurred in 2014. Also, the number of data breaches involving more than 100 million compromised data records doubled compared to 2013.

In terms of industries, retail and financial services experienced the most noticeable trends compared to other industry sectors in 2014. Retail experienced a slight increase in data breaches compared to last year, accounting for 11% of all data breaches in 2014. However, in terms of data records compromised, the retail industry saw its share increase to 55% compared to 29% last year due to an increased number of attacks that targeted point-of-sale systems.

For the Financial Services sector, the number of data breaches remained relatively flat year over year, but the average number of records lost per breach increased ten-fold to 1.1 million from 112,000.

“Not only are data breach numbers rising, but the breaches are becoming more severe,” added Gonen. “Being breached is not a question of “if’ but “when.’ Breach prevention and threat monitoring can only go so far and do not always keep the cyber criminals out. Companies need to adopt a data-centric view of digital threats starting with better identity and access control techniques such as multi-factor authentication and the use of encryption and key management to secure sensitive data. That way, if the data is stolen it is useless to the thieves.”