While most security professionals focus on thwarting data breaches from cyber attacks, a new study exposes visual hacking, a low-tech method used to capture sensitive, confidential and private information for unauthorized use, as an under-addressed corporate risk. 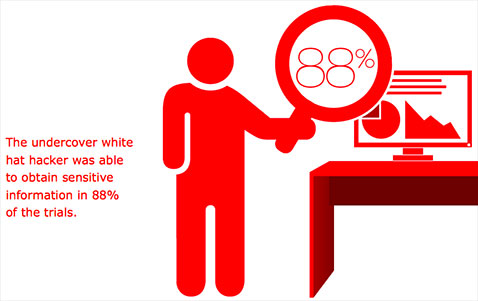 A visual hacking experiment conducted by the Ponemon Institute on behalf of the Visual Privacy Advisory Council and 3M Company, found that in nearly nine out of ten attempts (88 percent), a white hat hacker was able to visually hack sensitive company information, such as employee access and login credentials, that could potentially put a company at risk for a much larger data breach.

During the study, a computer security expert specializing in penetration testing, entered the offices of eight U.S.-based companies under the guise of a temporary or part-time worker. He attempted to visually retrieve sensitive or confidential information using three methods: walking through the office scouting for information in full-view on desks, screens and other indiscrete locations, taking a stack of business documents labeled as confidential and finally, using his smartphone to take a picture of confidential information displayed on a computer screen. All three of these tasks were completed in full-view of other office workers.

The study revealed the following:

Unregulated functional areas were the most likely to experience a visual hack. On average, customer service roles consistently saw the highest number of visual hacks at 6.0, with communications at 5.6 and sales force management 5.2. Regulated functional areas like accounting & finance saw lower averages at 1.9, and legal at 1.0 experienced the least.

Visual hacking controls work. Companies that had relatively low visual hacking rates had more controls in place, such as mandatory training and awareness, clean desk policies document shredding process, suspicious reporting process, and employed the use of privacy filters, to protect against the threat than those without. For instance, in those companies that employed the use of privacy filters, 50 percent of trials saw three or less information types visually hacked while 43 percent of companies that did not use privacy filters saw four or more information types visually hacked.

“Visual privacy is a security issue that is often invisible to senior management, which is why it often goes unaddressed,” says Mari Frank, attorney/mediator and privacy consultant/expert at Mari J. Frank, Esq. and Associates and member of the Visual Privacy Advisory Council. “This study helps to emphasize the importance of implementing a visual privacy policy, educating employees and contractors about how to be responsible with sensitive data they are handling, as well as equipping high-risk employees with the proper tools, such as privacy filters, to protect information as it is displayed.”