IT security professionals around the globe believe the system of trust established by cryptographic keys and digital certificates, as well as the security of trillions of dollars of the world’s economy, is at the breaking point.

For the first time, half of the more than 2,300 IT security professionals surveyed by The Ponemon Institute now believe the technology behind the trust their business requires to operate is in jeopardy. 100% of organizations surveyed had responded to multiple attacks on keys and certificates over the last two years. 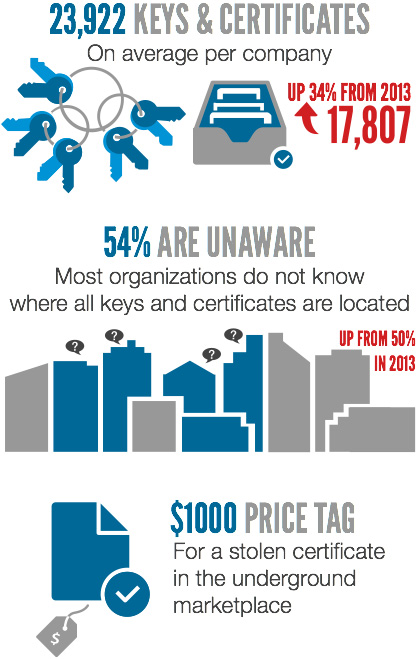 Research reveals that over the next two years, the risk facing every Global 5000 enterprise from attacks on keys and certificates is at least $53 million USD, an increase of 51 percent from 2013. For four years running, 100 percent of the companies surveyed said they had responded to multiple attacks on keys and certificates, and vulnerabilities have taken their toll.

“The overwhelming theme in this year’s report is that online trust is at the breaking point. And it’s no surprise. Leading researchers from FireEye, Intel, Kaspersky, and Mandiant, and many others consistently identify the misuse of key and certificates as an important part of APT and cybercriminal operations,” said Kevin Bocek, VP of Security Strategy and Threat Intelligence at Venafi. “Whether they realize it or not, every business relies upon cryptographic keys and digital certificates to operate. Without the trust established by keys and certificates, we’d be back to the Internet ‘stone age’ – not knowing if a website, device, or mobile application can be trusted.”

Security pros worry about a Cryptoapocalypse-like event: A scenario where the standard algorithms of trust like RSA and SHA are compromised and exploited overnight is reported as the most alarming threat. Instantly transactions, payments, mobile applications, and a growing number of Internet of Things could not be trusted. Coined by researchers at Black Hat 2013, a Cryptoapocalypse would dwarf Heartbleed in scope, complexity, and time to remediate.

“With the rising tide of attacks on keys and certificates, it’s important that enterprises really understand the grave financial consequences. We couldn’t run the world’s digital economy without the system of trust they create,” said Dr. Larry Ponemon, chairman and founder of the Ponemon Institute. “This research is incredibly timely for IT security professionals everywhere – they need a wake up call like this to realize they can no longer place blind trust in keys and certificates that are increasingly being misused by cybercriminals.”survey