Survey scammers and adware peddlers continue to advantage of the interest Whatsapp users have in the quietly rolled out Free Voice Calling feature.

According to Malwarebytes’ Jovi Umawing, both English-speaking and Arabic-speaking users are being targeted.

The lure comes via a Whatsapp message: a message saying that the user has been invited to try “Whatsapp Calling” and to visit a particular site (www[dot]whatsappvoiceplus[dot]com) to activate the feature.

The site first instructs them to invite ten friends (click on the screenshot to enlarge it): 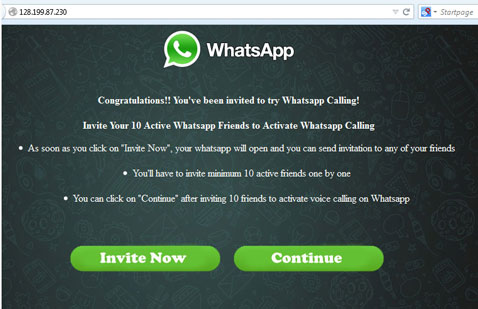 Once they do it, they are asked to complete a survey.

“Clicking ‘Take The Survey’ loads up a survey page, which would either present a typical selection of survey questions, or give the WhatsApp fan a ‘not available in your region’ message,” says Umawing.

In another approach, scammers are trying to get users to install adware by offering “updated” or cracked versions of the app that apparently have the free calling feature enabled.

An indication that something is not right is the fact that the offered file is a Windows executable: Whatsapp is available as an app only for mobile users.

WhatsApp began to roll out the Free Voice Calling feature to some Android users in January, and it can be turned on only if you are directly invited to do so by another user. The feature is activated when a user answers a WhatsApp voice call from a friend.