Spurred by high-profile data breaches, Edward Snowden’s revelations, and by the growing awareness that their smartphones hold a lot of sensitive data, most UK users have become more careful about protecting their personal privacy, and consider the privacy of their mobile data to be in their own hands.

Among the 1000 smartphone owners in the United Kingdom polled by Lookout, three out of every four consumers say that they are now very careful about protecting their personal privacy.

67 percent agree that they are most responsible for the privacy of their mobile data, and only 4 percent believe the UK government is: 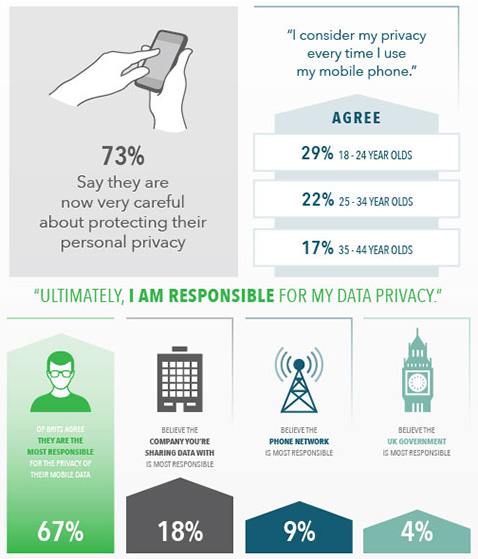 Two thirds of the respondents said that they are not willing to share more data via their mobile apps in return for a cheaper (68%) or a more tailored service (66%), but also that among the rest of them are three times more younger users (aged 18-34) than older ones (aged 55 and above).

Another interesting thing that the survey revealed is that users are infinitely more concerned about protecting their own personal information than that of their family, friends, and work information. Only 3 percent prioritize protecting work data over all other forms, while the percentage for personal info is 81%.

But, all this doesn’t mean that Brits don’t engage in risky behavior. The majority (78%) connect to (possibly unsecured) public open Wi-Fi networks, and over 60 percent plug their phones into public charging stations and download apps without reading permissions. Only 39 percent check the URL of the mobile sites they visit, and 29 percent download apps from unofficial marketplaces.

A final curious finding is that that Windows Phone owners are more privacy-conscious than Android and iPhone users (41% vs. 26%).