Even though nearly half of IT decision makers admit they have employees with access rights not necessary to their current role, more than one out of four companies indicated they have no controls in place to manage privileged access. 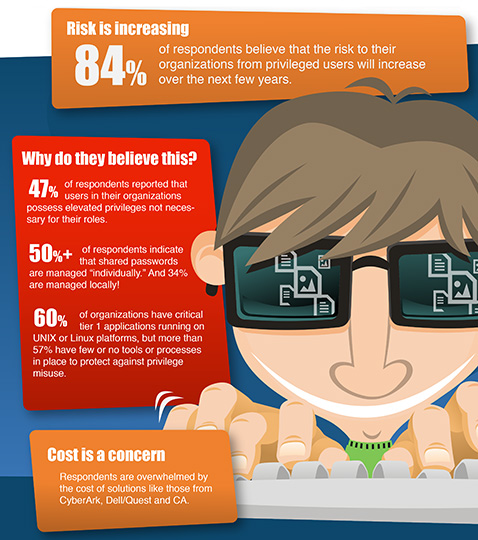 A recent report by a leading industry analyst firm shared that there are five key solution areas for privileged account management (PAM). However, according to the BeyondTrust survey, only 40 percent of respondents have deployed at least some of these capabilities enterprise-wide, with 30 percent having no solutions at all. With the number of threats that are possibly based on excessive privilege rights, such as the ability to steal credentials, the ease of access to sensitive data, and an increase in the harm that can be done by malicious insiders, companies must do a better job at protecting company assets.

Privileged account management is viewed as a cross-functional need:

The focus on PAM is increasing, but cost is a concern:

The risk associated with privileged users is also increasing:

“Shared passwords” are still a problem:

Business-critical, tier-1 applications are at risk:

“While several stats in this year’s survey revealed the amount of work that needs to be done in the PAM space, it’s encouraging to see the trend of organizations’ security and IT ops teams willingness to work together to better manage the risks associated with excessive privileges,” said Scott Lang, director of privilege strategies, BeyondTrust. “Therefore, we hope this growing partnership will mean a new interest in deploying and maintaining effective PAM solutions and policies.”

The survey reflects responses from 728 IT decision makers including security managers, and network and systems engineers across a number of industries including financial services, manufacturing, and government, among others.