This week, law enforcement and judicial authorities worldwide have taken down the most prolific English-speaking cybercriminal forum to date: Darkode. 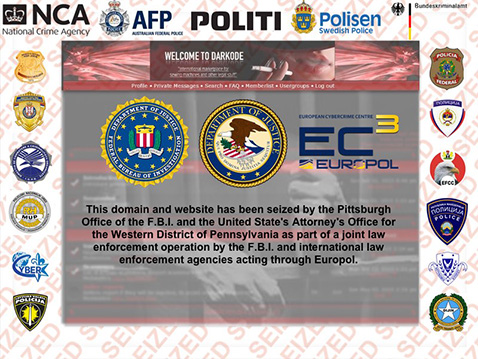 In an international coordinated action against the hacking forum and its users, investigators from all over the world targeted cybercriminals that were using the Darkode forum to trade and barter their hacking expertise, malware and botnets, and to find partners for their next spam runs or malware attacks.

The operation was led by the FBI and supported by Europol’s European Cybercrime Centre (EC3), with the involvement of law enforcement officers from 20 countries in and outside the European Union.

The more than 250-300 active users of Darkode formed a closed community. Membership was by invitation only, and after being vetted by a trusted member of the forum. Although there were several scandals, changes and rumours of the forum being compromised during the course of its existence, the Darkode forum was the place to go to if you were an English-speaking cybercriminal.

“Of the roughly 800 criminal internet forums worldwide, Darkode represented one of the gravest threats to the integrity of data on computers in the United States and around the world and was the most sophisticated English-speaking forum for criminal computer hackers in the world,” said U.S. Attorney David J. Hickton. “Through this operation, we have dismantled a cyber hornets’ nest of criminal hackers which was believed by many, including the hackers themselves, to be impenetrable.”

The takedown of the Darkode forum also marks the end for its criminal community of users and severely disrupts their malicious activity, ranging from hacking and stealing credit card and bank credentials, to botnets for rent and so-called DDoS attacks.

Europol’s Director Rob Wainwright says: “Today’s global action caused significant disruption to the underground economy, and is a stark reminder that private forums are no sanctuary for criminals and are not beyond the reach of law enforcement.”
More about
Share this