Social bookmarking web service Delicious has released a free beta version of Dmail, an extension for the Chrome browser which allows senders to delete an email they sent and have regretted sending soon after. 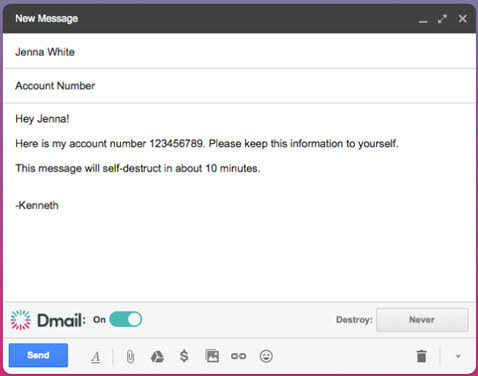 The extension currently works if the sender uses Gmail, but the recipient doesn’t have to have the plugin installed, or even use Gmail. That’s because the sent message is stored on the company’s server, and the recipient is given a link to view the message.

The sender can also set the message to “self-destruct” after a certain period of time (an hour, day or week).

After the sender revokes access to an email, the recipient gets told that the message is no longer available.

The service works like this: once the sender sends a message, it is encrypted locally on his or her computer with a 256-bit algorithm.

“An encrypted copy of that email is sent to a datastore controlled by Dmail. The recipient of the email is sent both the location of that datastore, as well as a key to view the decrypted message,” Dmail’s Eric Kuhn explained to Sarah Perez. “Neither Gmail nor Dmail servers ever receive both the decryption key and encrypted message. Only the recipient and sender can read the email legibly.”

At the moment, the extension only works with Gmail and via the Chrome browser, but an iOS and Android app are in the works.

Hopefully, by the time they are released, a number of serious bugs will be fixed, and other helpful features like prevention of email forwarding, and document destruction will be available.

According to the comments left on Google’s Chrome web store by people who have tried the extension out, at the moment the destruction of the emails is inconsistent, the plugin prevents users from logging out of their accounts, and there is apparently no obvious uninstall option.

In short, if you want to try it out, don’t send sensitive information just yet.
More about
Share this