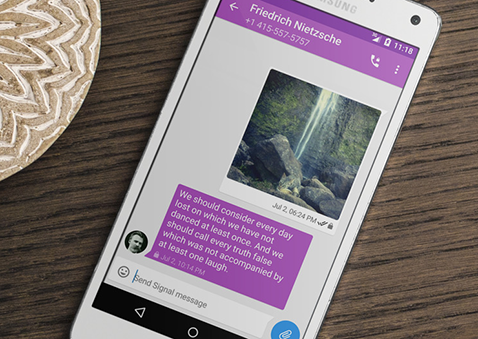 Signal for Android, though, has been equipped with additional functionality – namely, users will also be able to send and receive end-to-end encrypted messages. That’s because the Android version is a combination of Open Whisper Systems’ previous Android offerings: TextSecure and RedPhone.

“Over the next few days, users with TextSecure installed will get a normal update that brings a new name. The new version includes all the existing functionality of TextSecure, plus the ability to make and receive private calls with other Signal users,” Open Whisper Systems’ founder Moxie Marlinspike explained in a blog post.

“Users with RedPhone installed will be prompted to install Signal instead. If you already have Signal installed, you can just uninstall RedPhone. It will no longer be maintained as an independent app.”

Marlinspike has invited experts to verify the company’s protocols and implementations by reviewing the app’s source code, which can be found in the organization’s GitHub repository.

“As always, Signal uses your existing phone number and address book. There are no separate logins, usernames, passwords, or PINs to manage or lose,” he pointed out, and assured users that no one in the organization and no one outside it cannot hear their conversations or see their messages, and no one else can either.
More about
Share this