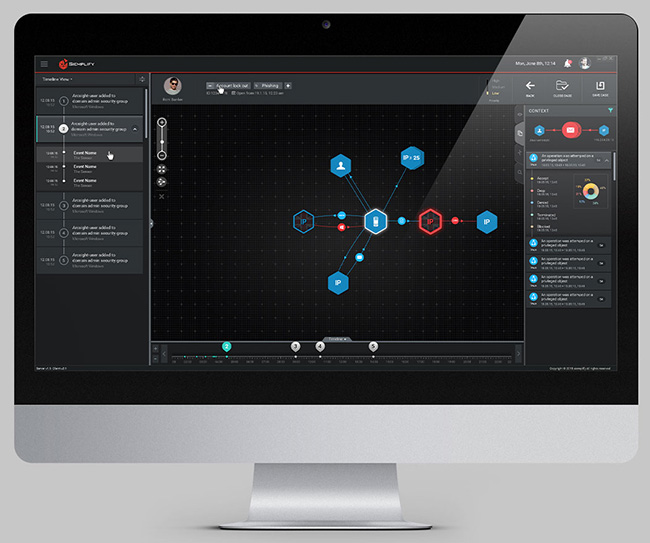 According to a study conducted by HP and the Ponemon Institute, companies need an average of 46 days to resolve a cyberattack. “The problem is not detection per se but discerning the threats hidden in the noise of thousands of alerts generated by the disparate security monitoring systems,” said Amos Stern, CEO and co-founder of Siemplify. “This makes it impossible to see the broader attack chain and identify root cause quickly.”

The Siemplify Threat Analysis Platform disrupts the status quo with real-time graph analysis and by applying methodologies gained from military intelligence to cybersecurity:

Contextualization sets the stage by intelligently consolidating, correlating and analyzing threat indicators in real time from throughout a company’s existing cybersecurity infrastructure.

Visualization and modeling tools supercharge incident response by presenting prioritized threat information as visual story lines, enabling analysts to identify root causes in real time, pivot across data sources and drill down into every element of the attack from a single console to minimize resolution times.

Multiple Fortune 50 companies in consumer packaged goods and financial services are currently piloting the Siemplify Threat Analysis Platform in the U.S. Early adopters of the platform also include several of the largest banking, telecommunications and pharmaceutical firms in Israel.

“Siemplify has been a game changer for us,” said Arieh Shalem, chief information and security officer (CISO) at Orange Telecommunications Israel. “Analyzing and prioritizing tens of thousands of security alerts has been very time consuming. Investigations have been compromised by limited visibility and inadequate tools. Siemplify connects the dots in real time, allowing us to shorten the period of time from detection to mitigation from weeks to minutes.”

At launch time, Siemplify has received $4 million from an early stage fund and notable angel investors with deep expertise in enterprise IT security.