Facebook is testing three new features that should help prevent or at least minimize harassment of users on its platform.

The first will alert users if someone tries to impersonate them on the social network by using the same name and profile photo they are using.

The alerts go out automatically, and users will be able to review the matter and say whether they believe the profile in question is impersonating them or not. Then, the Facebook team will review each of these cases manually.

Facebook’s Head of Global Safety Antigone Davis told Mashable that the feature is already live about 75% of the world, and will soon be rolled out completely. Online impersonation of users can and is often used by malicious individuals as a harassing tool.

The second feature will make it easier for victims of nonconsensual intimate image sharing, which has been prohibited by Facebook since 2012, to report the photos and to identify themselves in them. When victims choose to do that, they will be provided links to helpful outside resources such as support groups for victims of abuse or information about legal options they might take advantage of. Of course, the reporting also triggers a review of the photo. 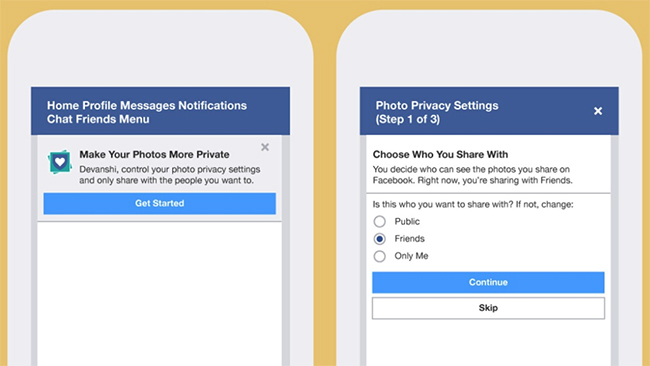 Finally, the third feature has been modeled on Facebook’s popular Privacy Checkup (“Privacy Dinosaur”) tool. This new feature (pictured above) will concentrate on users’ photos, and will help them review privacy settings for their photos.

These new features are the result of a number of roundtable discussions where users, activists, NGOs and various other groups have shared their insights on the dangers users face on Facebook – especially female ones – and offered their opinions on how the company can better protect their privacy, keep them safe, and allow them to fully participate online.