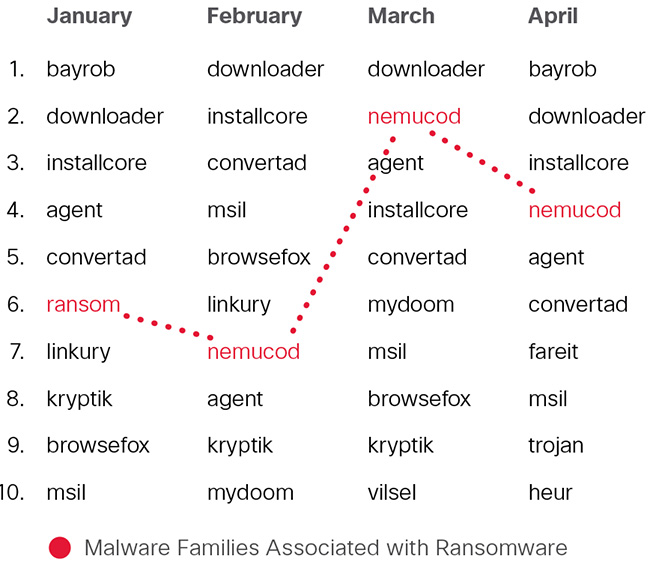 So far in 2016, ransomware has become the most profitable malware type in history. Cisco expects to see this trend continue with even more destructive ransomware that can spread by itself and hold entire networks, and therefore companies, hostage. New modular strains of ransomware will be able to quickly switch tactics to maximize efficiency. For example, future ransomware attacks will evade detection by being able to limit CPU usage and refrain from command-and-control actions. These new ransomware strains will spread faster and self-replicate within organizations before coordinating ransom activities.

“The truth is that many organisations probably don’t see themselves as ‘high value targets’ for attackers and it’s likely that they have very minimal protection or staff training and awareness. However, many malicious actors will consider these businesses as easy targets and will look to hold organisations to ransom through a ‘soft attack’ that compromises its data,” Rob Norris, Director of Enterprise & Cyber Security in EMEIA at Fujitsu, told Help Net Security.

Visibility across the network and endpoints remains a primary challenge. On average, organizations take up to 200 days to identify new threats. Cisco’s median time to detection (TTD) continues to outpace the industry, hitting a new low of approximately 13 hours to detect previously unknown compromises for the six months ending in April 2016.

This result is down from 17.5 hours for the period ending in October 2015. Faster time to detection of threats is critical to constrain attackers’ operational space and minimize damage from intrusions. This figure is based on opt-in security telemetry gathered from Cisco security products deployed worldwide.

The underground continues to innovate

As attackers innovate, many defenders continue to struggle with maintaining the security of their devices and systems. Unsupported and unpatched systems create additional opportunities for attackers to easily gain access, remain undetected, and maximize damage and profits. The Cisco 2016 Midyear Cybersecurity Report shows that this challenge persists on a global scale

While organizations in critical industries such as healthcare have experienced a significant uptick in attacks over the past several months, the report’s findings indicate that all vertical markets and global regions are being targeted. Clubs and organizations, charities and non-governmental organization (NGOs), and electronics businesses have all experienced an increase in attacks in the first half of 2016. On the world stage, geopolitical concerns include regulatory complexity and contradictory cybersecurity policies by country. The need to control or access data may limit and conflict with international commerce in a sophisticated threat landscape.

“Cyber-criminals continue to be incredibly innovative, and more often than not have access to the same defensive technology as the networks they are attacking, so it is imperative for organisations to leverage their human security resources to proactively identify threats. This is key to decreasing time to detection, and can be the difference between stopping an attack in its tracks or sacrificing valuable data,” says Richard Brown, Director EMEA Channels & Alliances at Arbor Networks.

For attackers, more time to operate undetected results in more profits. In the first half of 2016, Cisco reports, attacker profits have skyrocketed due to the following:

Expanding focus: Attackers are broadening their focus from client-side to server-side exploits, avoiding detection and maximizing potential damage and profits.

Evolving attack methods: During the first half of 2016, adversaries continued to evolve their attack methods to capitalize on defenders’ lack of visibility.

Covering tracks: Contributing to defenders’ visibility challenges, adversaries are increasing their use of encryption as a method of masking various components of their operations. 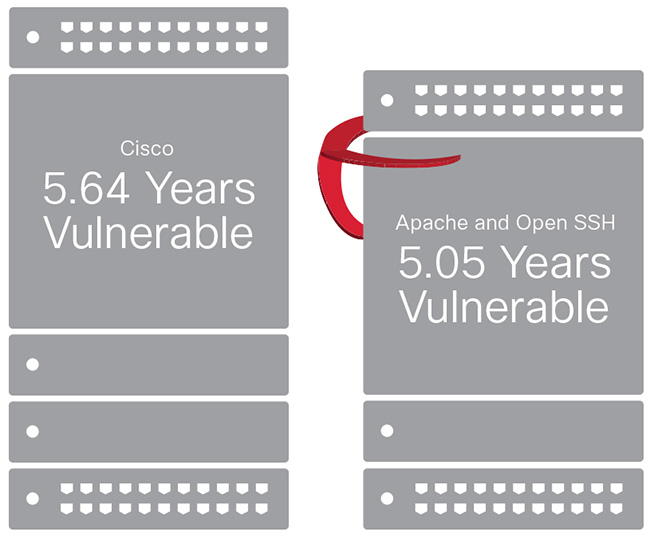 In the face of sophisticated attacks, limited resources and aging infrastructure, defenders are struggling to keep pace with their adversaries. Data suggests defenders are less likely to address adequate network hygiene, such as patching, the more critical the technology is to business operations. For example:

In addition, Cisco found that much of their infrastructure was unsupported or operating with known vulnerabilities. This problem is systemic across vendors and endpoints. Specifically, Cisco researchers examined 103,121 Cisco devices connected to the Internet and found that:

In comparison, Cisco also looked across software infrastructure at a sample of over 3 million installations. The majority were Apache and OpenSSH with an average number of 16 known vulnerabilities, running for an average of 5.05 years.

Browser updates are the lightest-weight updates for endpoints, while enterprise applications and server-side infrastructure are harder to update and can cause business continuity problems. In essence, the more critical an application is to business operations, the less likely it is to be addressed frequently, creating gaps and opportunities for attackers.