Akamai Technologies released its Second Quarter, 2016 State of the Internet / Security Report, which highlights the cloud security landscape, specifically trends with DDoS and web application attacks, as well as malicious traffic from bots. 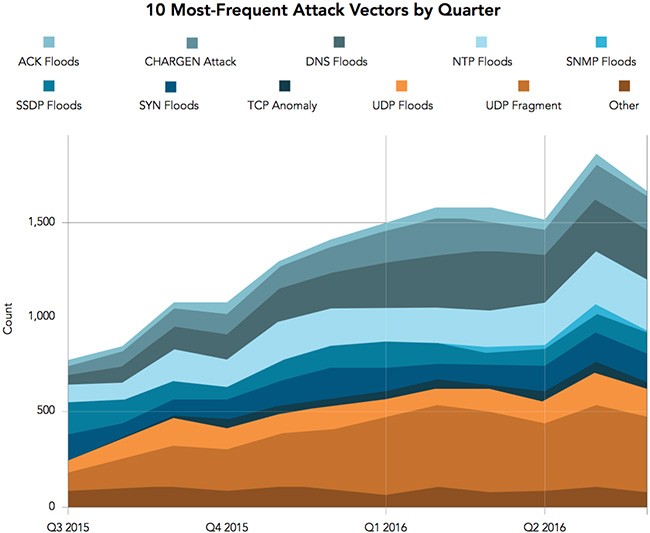 During May 2016, the number of attacks spiked, fueled by campaigns targeting the gaming industry

“While attack sizes are decreasing, we continue to see an uptick in the number of attacks as launch tools grow increasingly pervasive and easy to use and monetize,” said Martin McKeay, Editor-in-Chief, State of the Internet / Security Report.

“Arbor Networks’ recent 1H 2016 DDoS report aligns with much of what Akamai’s State of the Internet report found. The size, scale and frequency of DDoS attacks continues to grow at alarming rate. Through the first half of 2016 Arbor’s Active Threat Level Analysis System (ATLAS) recorded a peak attack size of 579Gbps, a 30% increase in attack volume and 274 attacks over 100Gbps in just the first half of 2016 compared to 223 in all of 2015,” Gary Sockrider, Principal Security Analyst at Arbor Networks, told Help Net Security.

“The complexity of DDoS attacks has also been on the rise. As reported by security researcher, Bruce Schneier, it appears that nation-states have been probing critical pieces of internet infrastructure with extremely complex DDoS attacks. This rise in complexity along with the continued increase in size, scale and frequency of attacks reinforces the need for enterprises to deploy multi-layer DDoS defenses that can detect and mitigate both volumetric and stealthy application-layer attacks,” Sockrider added. 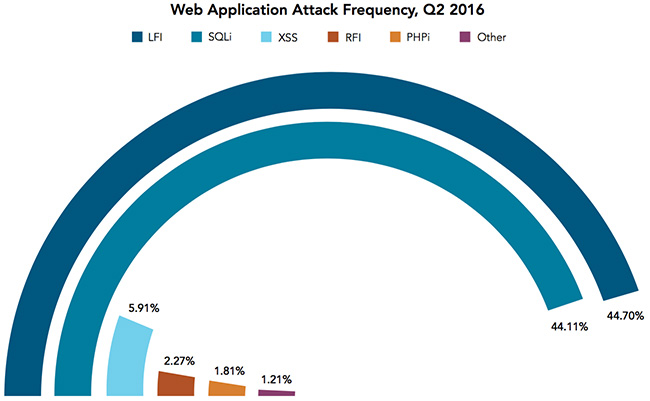 “Web applications remain the most vulnerable entry point for any company and organization, so hackers will also continue exploiting them to get in. I am little bit surprised with the high number of LFI attacks, as they are not as popular as XSS, for example. That can probably be explained by malicious bots and crawlers that are targeted to exploit them rather then less dangerous XSS attacks,” said Ilia Kolochenko, CEO of High-Tech Bridge.

To those of us experienced in combating the bot problem its gratifying to hear confirmation of what we already knew, that nearly half the traffic on the Internet is bots, according to Stephen Singam, Managing Director, Security Research at Distil Networks.

“The bot problem has many facets that worry companies, the primary one is which bots are good or bad? Everybody welcomes a good bot (like those from popular search engines) on their site because it helps the business but nobody wants bad bots or advanced persistent bots (APBs) performing nefarious tasks that damage the business. This report states that only 28% are known declared bots, indicating a large amount of infrastructure resource is wasted on daily traffic from undeclared tools and bad bots. In reality bots are indiscriminately scraping content and prices, brute forcing account credentials, running vulnerability scanners, and attempting credit card fraud,” said Singam.

“At a high level, this report is acknowledging the problem but doesn’t go deeper to understand what those bots are doing on a website. It also raises the question of whether Akamai is charging companies for all this unwanted bot traffic?” he concluded.