A new Bitglass report on insider threats in the enterprise found that, in a third of organizations surveyed, careless or malicious user behavior resulted in data leakage, up slightly from a year ago. 56 percent of respondents believe insider leaks have become more frequent in the last year. 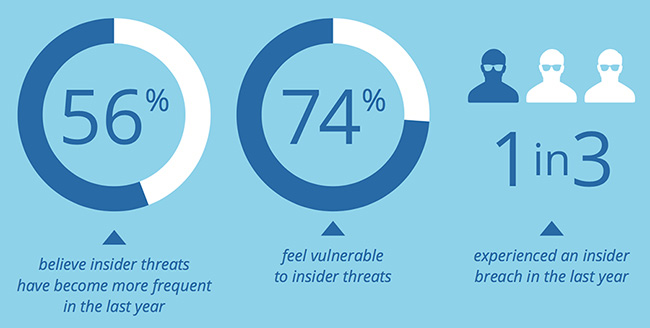 “Adoption of cloud and BYOD are positive developments, but organizations that have limited cross-app visibility will struggle to detect anomalous behavior and need to rethink their approach to data security,” said Nat Kausik, CEO, Bitglass. “The reality is that cloud apps have made data more readily accessible and insider threats more likely – it’s up to the enterprise to put adequate data controls and policies in place to secure vital data.”

Bitglass found that 64 percent of enterprises can detect a breach within a week, up significantly from 42 percent a year ago. Only 23 percent take a month or longer to identify insider breaches, which indicates growing use of cloud-based audit and security tools. Respondents identified analytics as critical in detecting anomalous behavior.

Employee training (57 percent) and identity management solutions (52 percent) topped the list of best means for preventing insider attacks. Data leakage prevention was also included among the most effective tools in 49 percent of organizations.