As every business becomes a digital business, the spread of technology such as augmented reality (AR) and Internet of Things (IoT) devices can add significant business value and personal convenience. Yet a new study from ISACA shows that consumers and IT professionals disagree on the risks and rewards. 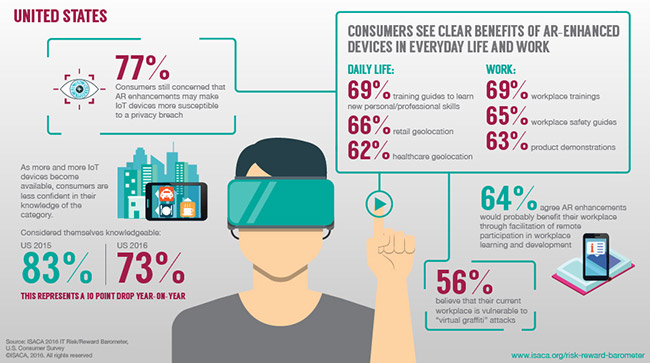 The applications of AR consumers see offering the greatest benefits include training guides and retail and healthcare geolocation for personal use, and training, safety guides and product demonstrations in a work setting. At the same time, confusion over the Internet of Things is growing, according to the consumer study. The percentage of consumers who are confident in their ability to identify IoT technologies has dropped 10 points or more from 2015 to 2016 in Australia, UK and the US.

ISACA’s annual IT Risk/Reward Barometer polls thousands of IT and cybersecurity professionals and consumers worldwide to uncover attitudes and behaviors about essential technologies and information, and the trade-offs organizations and consumers are making in gauging the risks and rewards. This year’s consumer study focused on IoT devices in general and those enhanced with AR in the US, UK, Australia, India and Singapore.

According to Goldman Sachs, AR and virtual reality have the potential to become the next big computing platform. The firm’s conservative estimate is that the hardware and software market will grow to US $80 billion by 2025. Awareness of AR grew rapidly with the launch of the Pokémon Go game in July 2016, and many businesses saw profit directly if their site was incorporated into the game.

“With the proliferation of IoT-enabled devices and the drive to provide enhanced user experiences, IoT and AR have the power to become a source of unprecedented value and opportunity, as well as significant risk,” said Rob Clyde, an ISACA board director. “Individuals and enterprises should focus on rapidly getting up to speed on these technologies while learning how to manage risk so they do not compromise their company’s ability to innovate.”

According to the US consumer segment of ISACA’s 2016 IT Risk/Reward Barometer:

The Barometer shows that consumers and IT professionals alike have concerns about the possible risks of IoT devices enhanced with AR. Seventy-seven percent of consumers are concerned that these enhancements may make them more personally vulnerable to a privacy breach. Over half (56 percent) feel that their workplace is vulnerable to so-called virtual graffiti attacks.

The parallel survey conducted among US IT and cybersecurity professionals shows that the business world is still in the early stages of AR adoption:

“Enterprises need to work on being agile and applying sound measures around governance, security and risk management to fully realize the benefits of these technology advances. Proactive monitoring for malicious activity like virtual graffiti and data breaches is critical for business to gain value and mitigate risk,” said Christos Dimitriadis, chair of ISACA’s Board of Directors and group director of Information Security for INTRALOT.

How enterprises can prepare for AR