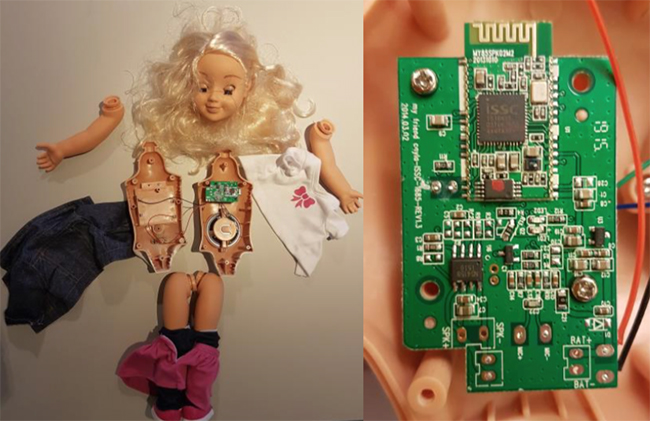 The toys come with companion apps, and the latter use services by Nuance Communications, a company headquartered in Massachussetts that specializes in voice-and speech-recognition services for a variety of industries. This allows the toys to interpret speech and to have conversations with the kids.

They toys are sold in the US, Scandinavia, a number of European countries, Australia, and the Middle East.

According to the findings by researchers from Scandinavian tech consultancy Bouvet, which was contracted to test the toys on behalf of the the Norwegian Consumer Council, there are many wrong things about these two interactive, Internet connected toys: lack of security, illegal user terms, sharing of kids’ secrets, asking for potentially sensitive information, subjecting kids to to hidden advertising, and more.

This short video by the council demonstrates just some of these problematic capabilities:

The report by Bouvet is much more detailed.

Calls for investigation and action

All in all, the Norwegian Consumer Council believes that the manufacturer of these toys is not adequately protecting users’ security and privacy, and have urged the Norwegian Data Protection Authority, the Consumer Ombudsman, and the Norwegian Directorate for Civil Protection to investigate whether the products fall foul of standing laws and regulations (Personal Data Act, Marketing Control Act, product safety regulations).

Joined in the complaint by other consumer and children protection organizations, EPIC is asking the FTC to investigate the matter and force the companies involved to improve security, provide more transparency when it comes to the collection and use of children’s personal information and speech data, and halt illegal, unfair and/or deceptive practices.

They are also asking the Commission to investigate other companies engaged in similar practices.

“These problems are emblematic of the increased spread of connected devices. In a growing market, it is essential that consumers, and especially children, are not being used as subjects for products that have not been sufficiently tested,” Finn Myrstad, Norwegian Consumer Council’s Head of Digital Services Section, noted.