Global healthcare IT professionals are confronting a rapidly changing, challenging landscape, with 66% experiencing a data breach and 88% feeling vulnerable as a result. In response, 73% are increasing IT security spending to offset threats to data, according to Thales and 451 Research.

Out with the old, in with the new?

While healthcare records have always been a desirable commodity on the black market, technological changes have further complicated its storage and protection. Despite the risks that come from increased access points, 65% of global healthcare respondents report their organisations are deploying to cloud, big data, and IoT environments without adequate data security controls.

Additionally, 67% of global healthcare respondents perceive network security as highly effective at stopping data breaches, followed closely by endpoint security (66%). While network and endpoint technologies are a required element of an organisation’s IT security stance, they are increasingly less effective at keeping external attacks at bay, and in securing cloud, big data, IoT and container deployments – which result in data being distributed, processed and stored outside corporate network boundaries.

In response to questions about why they are not implementing more effective data security controls, 43% of global healthcare respondents cited ‘lack of staff’, followed by ‘perception of complexity’ (37%) and ‘lack of organisational buy-in’ (also 37%).

Further exacerbating these barriers are internal and external threats. At 63%, privileged users top the list of internal threats. Executives are second at 51%, followed by external service providers with internal account access (29%). When it comes to external threats, cyber-criminals are considered the greatest challenge by 47%, with hacktivists a distant second (16%) and competitors in third (13%). 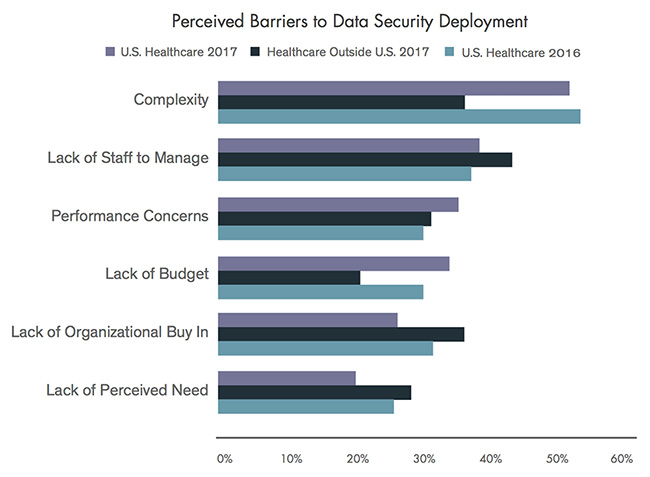 Across the board, encryption is the technology of choice when it comes to protecting sensitive data residing within cloud, IoT and container environments. Fifty-eight percent of global healthcare respondents opt to encrypt data in the public cloud, with the survey yielding similar numbers for IoT data (58%) and container data (60%).

Data sovereignty, a hot topic in light of concerns about new privacy regulations and government snooping, is also spurring encryption adoption. The technology is the clear choice for satisfying local data privacy laws such as the EU’s General Data Protection Regulation (GDPR) by 66% of global healthcare respondents. Also notable are the 33% searching for local data locations or cloud providers to meet data residency needs.

“Globally, healthcare companies are under pressure. The use of advanced technologies is increasingly impacting security decision-making, as our data privacy and residency requirements. For healthcare data to remain safe from cyber exploitation, security strategies need to move beyond laptops and desktops to encompass an ‘encrypt everything’ approach that best suits a world of internet-connected heart-rate monitors, implantable defibrillators and insulin pumps. Adhering to the security status quo will create vulnerabilities that lead to breaches, and further erode customer trust,” said Peter Galvin, VP of strategy, Thales e-Security.