IT leaders are poised to make radical changes in the workplace, but boardrooms are holding back progress by continuing to place too much emphasis on reducing costs and keeping the lights on, according to Fuze. 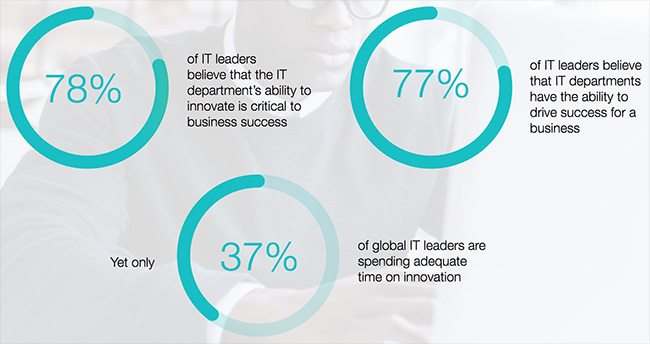 The global research reveals that 93 percent of IT leaders believe digital transformation should be a critical part of their roles and 47 percent want board-level executives to measure the IT function on its ability to innovate for the business. Yet today, 44 percent of IT leaders are measured on cost cutting, with the average IT department expected to reduce expenditure by 12 percent over the next five years.

IT teams are currently spending 83 percent of their time managing IT platforms and resolving user issues, and only 11 percent of their time planning future innovations. However, the majority of IT leaders see numerous opportunities to unleash their teams from the constraints of day-to-day operations. Eighty percent of IT leaders surveyed have named a cloud champion and 67 percent are actively looking to reduce application sprawl and time spent managing redundant technologies.

Looking ahead to 2020 and beyond, IT leaders see the imminent arrival of the app generation – those teenagers who have never known a world without smartphones and instant internet – as a positive driver for change as they enter the workplace. Three-quarters of IT leaders say younger generations will drive workplace innovation and today’s workforce agrees: 82 percent of workers say young people will help refresh approaches to technology.

Trends uncovered in the report include:

The rise of super-connected, yet super-mobile workforces

Consumer-like experiences in the workplace

Around half (48 percent) of today’s workers say their employer does not provide adequate technology and 75 percent of the app generation want to use the latest technology at work. Fifty-nine percent of IT leaders say that adopting new technologies is a priority. IT leaders will be expected to provide technologies with great user experiences, requiring cloud-based technologies that fit with the way employees want to work, interact, and collaborate.

Eighty-six percent of employees say face-to-face interaction will always be important for work and 71 percent of the app generation believe it is important to connect in person with coworkers. Offices will be designed around employees, with workspaces that bring together teams, spark conversation, and create the best ideas.

“IT leaders are dealing with a complex working environment, balancing the demands of multiple generations in the workplace while navigating the challenges of operational responsibilities, budget pressures, and customer expectations. Yet today’s IT leaders also understand this presents a fantastic opportunity to take the lead in shaping the future of work,” said Derek Yoo, CTO at Fuze.