News of data breaches and the risks of identity theft and fraud persist, but consumers’ vigilance and awareness haven’t kept pace. A national survey by Experian revealed that not only is America’s collective guard down, but people feel they are at a disadvantage when it comes to identity theft.

Concerned about the threat and the hassle

The survey makes clear that complexity, inconvenience and perceived odds of becoming an identity fraud victim have discouraged consumers from making identity protection best practices part of their daily lives.

While 84 percent of respondents acknowledge being concerned about the security of personal information online, nearly two-thirds (64 percent) agree it’s “too much of a hassle to constantly worry about securing personal information online.” The majority say staying on top of financial transactions is a challenge (53 percent), and nearly half (48 percent) don’t even check their credit reports regularly for errors or suspicious activity.

More concerning might be the misconceptions that exist regarding identity theft and fraud. A majority (56 percent) believe the risk of identity theft goes away over time, and more than half (52 percent) are convinced it’s not very likely they will become a victim of identity theft. Many think banks and credit card companies monitor their accounts, so they don’t have to worry about identity theft (53 percent), and nearly 1 in 10 respondents believe they aren’t at risk because “my credit is bad/I don’t have enough money.”

“Understanding the risks, being aware of the dark web, and researching what can help monitor and mitigate fraud aren’t optional these days. Unfortunately, the survey suggests consumers don’t consider these necessities a priority, which makes life easier for fraudsters,” said Michael Bruemmer, vice president of identity protection at Experian. 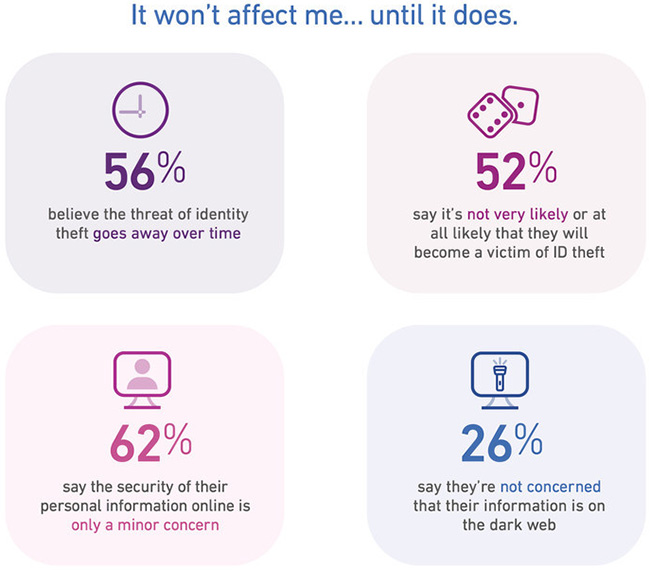 Tips to help monitor for fraud and protect personal information