The high-profile WannaCry attack was the first time that 57% of US consumers were exposed to how ransomware works, the results of a recent Carbon Black survey have revealed.

On the one hand, this high percentage is very disturbing. Ransomware has been around since 2005, and you would think that they would have at least heard of the danger from other people. On the other hand, it definitely means that a considerable number of the pollees haven’t been hit with ransomware before.

Which data matters to consumers?

The company has also asked the 5,000 individuals that participated in the survey things like who’s responsible for keeping their data safe, and how much are they willing to pay to get their encrypted files back if they were to be hit with ransomware.

The biggest responsibility for keeping their data safe is with the individual companies that house the data, most consumers said. Next came cybersecurity companies, then software providers. Government organizations are least responsible, in their eyes.

Would consumers consider leaving a business hit by ransomware? 72% said they would consider leaving their financial institution in such a case. That percentage is 68% and 70% for healthcare providers and retailers, respectively.

“Tying these numbers to what consumers consider their most valuable personal information is an interesting exercise,” the company noted.

“Financial information led the list (but only barely over family photos) while medical records [undeservedly] only made a blip on the radar, with 5% of consumers saying it was their most valuable information. In fact, medical records tied with phone data (messages, contacts, applications, etc.).” 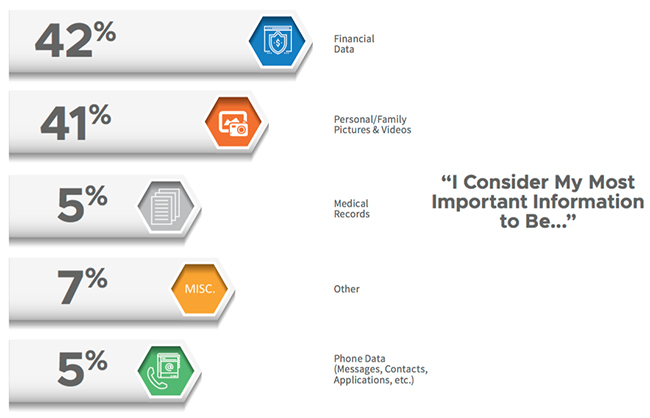 In the “other” category respondents placed game data, their music, personal writings, and their social security number.