While concerns about third-party risk remain high – particularly regarding cyber security – 58% of organizations ranked their programs as maturing or advanced, according to NAVEX Global. 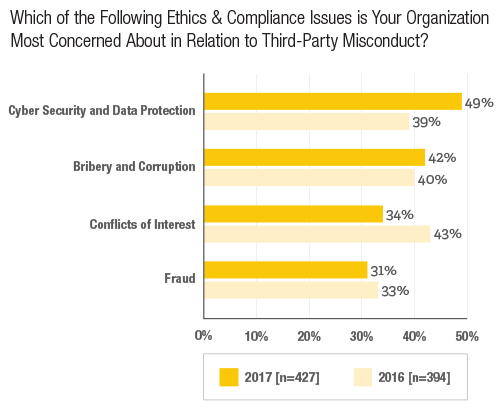 “We continue to see a move toward centralized and automated systems, which allow organizations to treat third parties the same way they treat their own employees with access to hotlines, training and policies,” said Randy Stephens, J.D., Vice President, NAVEX Global. “This is a smart approach, especially given the top concerns we see each year – even if some of those stated concerns fluctuate based on compliance failures in the headlines and shifting regulatory pressures.”

Top concerns for the year

Forty-nine percent of respondents said cybersecurity and data protection was their top concern this year. This is the first time cybersecurity was the top concern in this annual report with a 10 percentage point increase from the 2016 survey. Bribery and corruption was the second most-common concern at 42 percent, ahead of conflicts of interest (the top choice in the 2016 survey) at 34 percent.

“There appears to be a fluidity in what respondents believe is the highest risk – even if the top three choices remain fairly consistent,” said Stephens. “Cybersecurity is always a major concern. But bribery and corruption has also been in the news of late. This issue is particularly significant for large organizations, given the regulatory guidance in the Foreign Corrupt Practices Act – which organizations are increasingly using to inform into their programs.”

While survey respondents identified cybersecurity as the top concern overall, bribery and corruption was still the #1 issue among organizations with more than 5,000 employees and annual revenues of $1 billion or more. Bribery and corruption was also a greater concern among organizations where 20 percent or more of their annual revenue is related to or generated by their third parties.

The number of third-party partners, and the complexity of the business relationships, has grown considerably for most organizations in recent years. According to Michael Volkov, former federal prosecutor and CEO of The Volkov Law Group, LLC. “Organizational size and geography play a large role in determining what keeps executives up at night. It has become increasingly necessary to automate third-party risk assessment and mitigation using a robust compliance management system.” 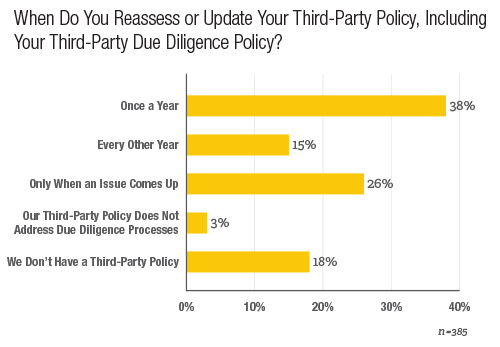