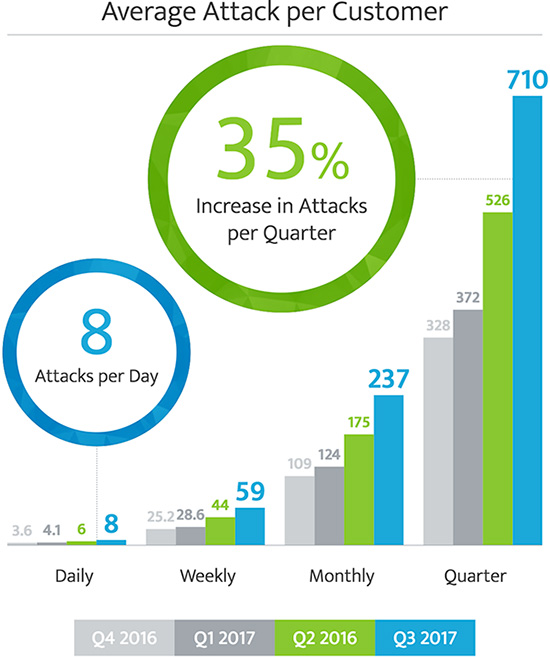 Corero attributes this increase in frequency to the growing availability of DDoS-for-hire services, and the proliferation of unsecured IoT devices. For example, the Reaper botnet is known to have already infected thousands of devices, and is believed to be particularly dangerous due to its ability to utilize known security flaws in the code of those insecure machines.

Ashley Stephenson, CEO at Corero, explains: “The growing availability of DDoS-for-hire services is causing an explosion of attacks, and puts anyone and everyone into the crosshairs. These services have lowered the barriers to entry in terms of both technical competence and price, allowing anyone to systematically attack and attempt to take down a company for less than $100. Alongside this trend is an attacker arms race to infect vulnerable devices, effectively thwarting other attackers from commandeering the device. Cyber criminals try to harness more and more Internet-connected devices to build ever larger botnets. The potential scale and power of IoT botnets has the ability to create Internet chaos and dire results for target victims.”

In addition to the frequency of attacks, the data reveals that hackers are using sophisticated, quick-fire, multi-vector attacks against an organization’s security. A fifth of the DDoS attack attempts recorded during Q2 2017 used multiple attack vectors. These attacks utilize several techniques in the hope that one, or the combination of a few, can penetrate the target network’s security defences.

Ashley Stephenson continues, “Despite the industry fascination with large scale, Internet-crippling DDoS attacks, the reality is that they don’t represent the biggest threat posed by DDoS attacks today. Cyber criminals have evolved their techniques from simple volumetric attacks to sophisticated multi-vector DDoS attacks. Often lasting just a few minutes, these quick-fire attacks evade security teams and can sometimes be accompanied by malware and other data exfiltration threats. We believe they are often used in conjunction with other cyber-attacks, and organisations that miss them do so at their peril.”

“The only way to keep up with these increasingly sophisticated, frequent and low volume attacks is to maintain comprehensive visibility and automated mitigation capabilities across a network, so that even everyday DDoS attacks can be instantly detected and blocked as they occur and before they cause damage.”

Corero observed a return of Ransom Denial of Service, or RDoS, in Q3 2017. A widespread wave of ransom DDoS threats from hacker group, Phantom Squad, started in September, targeting companies throughout the US, Europe and Asia. The extortion campaign spanned a variety of industries – from banking and financial institutions, to hosting providers, online gaming services and SaaS organisations – and threatened to launch attacks on 30 September unless a Bitcoin payment was made.

Ashley Stephenson continues, “Ransom is one of the oldest tricks in the cyber criminal’s book, and with cryptocurrency, is an anonymous way for them to turn a profit. As IoT botnets continue to rise, we may soon see hackers put on more dramatic RDoS displays to demonstrate the strength of their cyber firepower, so that their future demands for ransom will have to be taken more seriously. Paying the ransom is rarely the best defence, as it just encourages these demands to spread like wildfire. It is proven that with proper protection in place to automatically eliminate the DDoS threat, organizations will be in a much stronger position.”