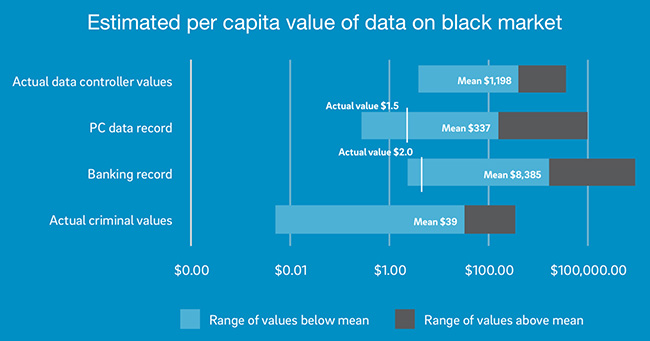 Trustwave Vice President of Security Research Ziv Mador said, “Today, data is one of the most valuable commodities possessed by any business. Whether that data belongs to the organization itself, its employees, suppliers or customers, it has a duty to protect that data to best of its ability. Companies that fail to accurately value their data are unlikely to make the right decisions regarding the level of cyber security investments to protect that data and are those most likely to fall short of regulations, such as the upcoming GDPR coming into effect in 2018. Businesses should look to the managed security services business model so that they have the confidence that full data risk vigilance is applied to all types of confidential and valuable data by specialists in the industry.”

Different levels of importance are placed on different data types such as PII, IP, payment card data and email: PII (47.4%) is given a higher priority than IP (27.6%), followed by payment card data (18.4%) and with corporate email (6.6%) coming last.

“Data risk vigilance” (DRV), a measure of efforts to protect data, is highest among Canadian firms and lowest amongst Australian businesses with the U.K. in the middle: The study assessed the measures organizations put in place to care for their data according to ten separate factors. Canadian and U.S. companies earned the highest DRV and were therefore more data risk vigilant, followed by the U.K., then Japan and Australia. Financial companies and IT/Communications companies were the highest scoring verticals and hospitality and retail the lowest scoring.

Industry sector influences the type of data that is given highest priority: Healthcare and hospitality sectors prioritize PII data with an average score of 3.5 and 3.4 out of 4, while industrial and IT/Communications companies rank IP as most important at 3.0 and 2.9 out of 4.

Patient data is the most rigorously risk assessed: Nearly 80% of organizations seeing patients as their prime data subject said they had carried out a comprehensive risk assessment, more than for any other data subject. In the U.K., where healthcare is largely controlled by the government through the National Health Service (NHS), this rose to 90% and in the U.S., where regulation is tight through Health Insurance Portability and Accountability Act (HIPAA), to 85%.

Certain types of PII are much less assessed in terms of risk: Contractors’ and suppliers’ individual PII data is less rigorously assessed than other types of PII, such as patient data. Forty five percent of companies holding contractors’ private data and 42% holding suppliers’ data failed to conduct comprehensive risk assessments of the data.

“Data is transforming businesses in the early 21st century in the same way electricity did at the start of the 20th. For nearly all businesses their PII and IP are essential assets that are enticing targets for criminals, those storing payment card data are the most tempting target. Data subjects, are becoming more aware of the value their data has to the businesses they deal with and are less forgiving when things go wrong. However, even as one data breach is eclipsed by another in the eye of the press, the regulators will continue to investigate the most serious as they are invested with more powers and the clout to issue ever greater fines,” said Bob Tarzey, senior security analyst at Quocirca and principal author of the study.