Although most organizations plan to increase adoption of IoT into operations, only 28 percent consider security strategies specific to IoT as “very important.”

Anticipated timeframe for an IoT security-related incident in the future 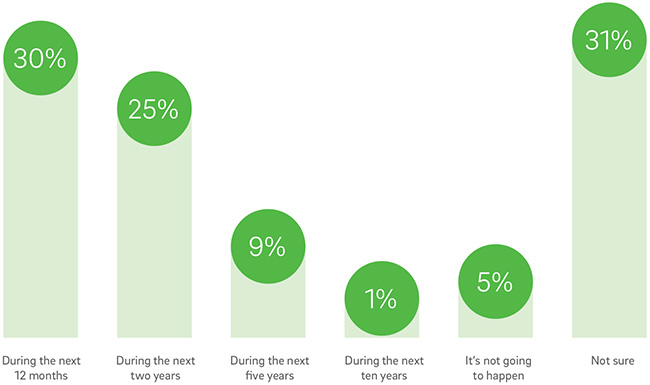 Osterman Research conducted the survey, primarily with midsize and large organizations with a median of 1,000 employees per organization. Individuals with applied security experience or knowledge were targeted. A total of 137 surveys were completed in November 2017.

IoT use is growing rapidly

Although greater than half surveyed plan on increasing use of IoT technologies, 42 percent are either unsure or have no plans to increase use. Fifty-seven percent cite security concerns as the number one barrier to greater IoT adoption, followed by “not relevant to operations” at 38 percent and “lack of budget” at 27 percent.

Disparity between IoT use and security

Only 28 percent of organizations surveyed consider that their IoT security strategy is “very important” when compared to other cybersecurity priorities within the organization. More surprising, however, is that greater than one-third believe that IoT security is only “somewhat” or “not” important.

Most have already experienced an IoT-related security incident

Sixty-one percent of those surveyed who have deployed some level of IoT technology have had to deal with a security incident related to IoT. While most of the reported incidents involved actual attacks – e.g., malware infiltration (24 percent of the organizations surveyed) and successful phishing and/or social engineering attacks (18 percent), some were merely attempted attacks, such as misconfiguration attacks (11 percent).

Additionally, organizations can be attacked by IoT devices from outside sources even though they have no IoT devices deployed internally. Overall, most believe they will experience an IoT security problem in the future, with 55 percent believing it will happen during the next two years.

Lack of patching policies and procedures

Only 49 percent of organizations surveyed have formal patching policies and procedures in place, and only about one-third patch their IoT devices within 24 hours after a fix becomes available.

Fewer than one-half of organizations consistently assess the IoT security risk posed by third-party partners, another 34 percent do so only periodically, and 19 percent don’t perform third-party IoT risk assessment at all. In addition, only 70 percent of organizations perform their own security testing or piloting of these devices, only 54 percent use published reviews, and only 32 percent use third-party testing services. Many (47 percent) rely on vendors’ security claims.

Confidence in IoT security is not high

Any device or sensor with an IP address connected to a corporate network may open the doors to a devastating security incident,” said Lawrence Munro, vice president SpiderLabs at Trustwave. “As IoT adoption continues to proliferate, manufactures of IoT are sidestepping security fundamentals as they rush to bring products to market. We are seeing lack of familiarity with secure coding concepts resulting in vulnerabilities, some of them a decade old, incorporated into final designs. Because updating IoT devices by nature is more challenging, many remain vulnerable even after patches are issued, and often patches are not even developed. Organizations need to properly document and test each internet-connected device on their network or face introducing potentially thousands of new attack vectors easily exploitable by cybercriminals.”

“Interestingly, the security of IoT was identified as the leading barrier to greater adoption,” noted Michael Osterman, principal analyst with Osterman Research. “There have been numerous IoT-related security problems in the recent past and the problems will only get worse until decision makers make security the key issue in their selection and deployment of IoT-related devices.”