Less than half of all organizations were able to detect a major cybersecurity incident within one hour. Even more concerning, less than one-third said that even if they detected a major incident, they would be unable to contain it within an hour, according to LogRhythm. 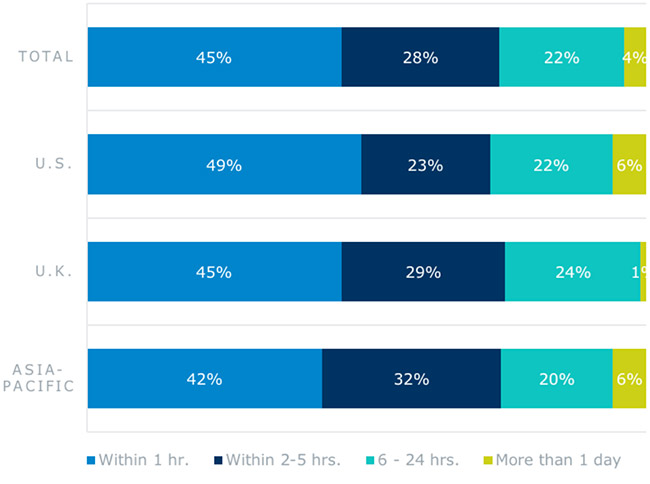 The study, conducted by Widmeyer, which surveyed 751 IT decision makers from the U.S., U.K. and Asia-Pacific, also revealed that a majority of organizations are only moderately confident in their ability to protect their companies against hackers.

The current state of security maturity

Many companies are focused on growing their security maturity, and team size is an important indicator. The survey revealed that, on average, companies employ 12 cybersecurity professionals in their organization. However, more than half of the respondents said that they employ 10 or fewer professionals on their teams.

Special threat detection programs are another indicator of security maturity. This study found that most decision makers—more than 70 percent of respondents—have programs in place to detect specific threats, such as ransomware, insider or employee threats, and denial of service attacks. The vast majority of IT decision makers—95 percent—also use security software to prevent and react to threats. And more than a quarter deploy at least 10 security software solutions to manage security threats.

When it comes to confidence levels, about half of security decision makers believe that a determined hacker can still breach their organization. In fact, over one-third reported that their company has experienced a breach in the past year—ranging from 29 percent in the United States to 39 percent in the Asia-Pacific region.

When specifically asked about level of confidence, these decision makers revealed that they have only moderately positive confidence in their cybersecurity measures and abilities—suggesting an attitude that is more hopeful than truly confident.

Similarly, most IT executives – over 60 percent – are only somewhat confident that their security software can detect all major breaches. Likewise, they are only moderately confident that they can protect their companies from hackers.

In addition, the level of confidence in one’s security is also swayed by other variables, such as the implementation of programs that target specific types of threats. For instance, decision makers who did not report having programs to protect against threats such as ransomware, insider threats, and service denial attacks are less confident in their security programs. Unsurprisingly, that same segment reported slower rates of detection, response, and containment. 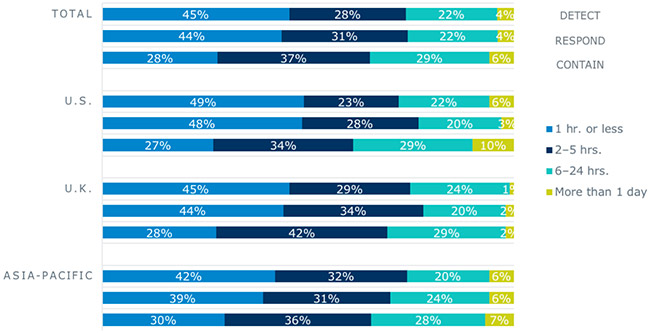 Comparing the time to contain a major incident

Ability to respond to cyberthreats

There are many factors that enable a security team to quickly detect and respond to an incident, including technology, process, programs, and people. When it comes to technology, a strong majority (nearly 80 percent) of IT executives said that a platform for security management, analysis, and response is beneficial—though only about a third rate such a platform as very beneficial. This response may reinforce the notion that true security confidence cannot be created with technology alone.

When asked to consider how their organization is operating from a Threat Lifecycle Management perspective – as an approach that includes discovery, qualification, neutralization and recovery from cyberattacks—IT executives were not overly optimistic. About a third of all respondents reported that they need help at virtually all stages in the TLM workflow, especially detecting, investigating, neutralizing, and recovering from cyberthreats.

Security organizations need adequate funding to effectively fight cybercrime. However, the study found that the percentage of resources allocated to cybersecurity from the overall IT budget is often on the low side. Overall, one-third of executives allocate 10 percent or less of their IT budget to security. Regionally, the U.S. had the lowest rate, and Asia-Pacific the highest.