During the first three months of 2018, cryptominers surged to the top of detected malware incidents, displacing ransomware as the number one threat, Comodo’s Global Malware Report Q1 2018 has found. 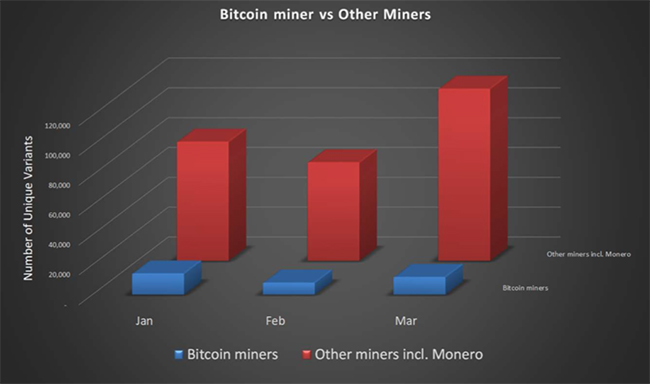 The surge of cryptominers

For years, Comodo Cybersecurity has tracked the rise of cryptominer attacks, malware that hijacks users’ computers to mine cryptocurrencies for the attacker’s profit while remaining hidden from the PC’s owner. The real surge, however, started in 2017 after Bitcoin skyrocketed to $20,000. Cryptominer attacks then leaped in 2018 as cryptocurrencies’ market capitalization topped $264 billion, shifting the attention of cybercriminals from ransomware.

During Q1 2018, Comodo Cybersecurity detected 28.9 million cryptominer incidents out of a total of 300 million malware incidents, amounting to a 10% share. The number of unique cryptominer variants grew from 93,750 in January to 127,000 in March. At the same time, the data shows this criminal attention came at the expense of ransomware activity, with new variants falling from 124,320 in January to 71,540 in March, a 42% decrease.

Two key factors drove this surge. Unlike the one and done nature of ransomware — and the semi-custom nature of each target’s variant — cryptominers are “the gift that keeps on giving.” They persist in infected machines or websites because they are often either unnoticed or tolerated by users, who find a performance impact more acceptable than dealing with the issue. And the higher value of cryptocurrencies made mining worth their while.

Monero, the cryptocurrency best known for its secrecy level, took the dubious honor from Bitcoin of becoming the cryptominers’ preferred target during the first quarter. According to Comodo Cybersecurity analysts, this is because its features favor cybercriminals: it hides transaction parties and amounts; cannot be tracked, blacklisted or linked to previous transactions; creates blocks every two minutes, providing more frequent opportunities for attack; and is designed for mining on ordinary computers.

Other highlights of the report include:

Hackers subverted Coinhive, Crypto-Loot and other cryptocurrency mining services. These legitimate companies offer website owners a way to monetize their sites by allowing customers to willingly let their computers be used for mining. The very short JavaScript that enabled the opt-in service, however, was quickly stolen by cybercriminals and used for malicious purposes. Widely and illegitimately spread worldwide by embedding the code into websites, Chrome extensions, typosquatted domains and malvertising, the hackers’ script stealthily uses system resources without the user’s permission to make money by mining cryptocurrencies.

Expect a ransomware resurgence. Ransomware attacks led the malware market in previous quarters, but showed a radical decrease in the number of overall detections, likely due to the shift to the low-hanging fruit of cryptominers. Ransomware’s overall share of incidents dropped from 42% in August 2017 to just 9% in February 2018. Comodo Cybersecurity Labs caution to prepare for new ransomware attacks in a changed guise, perhaps morphing into a weapon of data destruction — as seen with NotPetya — rather than a tool to extort a ransom.

Geopolitical malware detections correlate with current events around the world. In Q1 2018, Comodo Cybersecurity analysis yielded potential geopolitical correlations related to national elections in China and Russia. The company discovered correlations in Egypt, India, Iran, Israel, Turkey and Ukraine relative to military operations, along with other trends across Europe, Asia and Africa

Hot zones identified by malware type. Countries that currently have the most acute challenges associated with Trojans, viruses and worms include Brazil, Egypt, India, Indonesia, Iran, Mexico, Nigeria, Philippines, Russia and South Africa. Countries in a higher socioeconomic category — that can afford more professional cyber defenses — are often plagued by a higher ratio of application malware. Finally, countries that possess unusual malware profiles, such as Belarus, China, Israel, Japan, Kazakhstan, Turkey, U.K. and Ukraine are profiled in this Q1 2018 report

“Malware, like cyberspace itself, is merely a reflection of traditional, ‘real-world’ human affairs, and malware is always written for a purpose, whether it’s crime, espionage, terrorism or war,” said Dr. Kenneth Geers, chief research scientist at Comodo Cybersecurity. “Criminals’ proclivities to steal money more efficiently were evident with the surge in cryptomining. And the continued strong correlation of attack volume with current geopolitical events shows hackers of all motivations are well aware of the opportunities major breaking news provides them.”