Facebook has admitted that, between May 18 and 27, posts by some 14 million users were automatically set to be shared with the public. 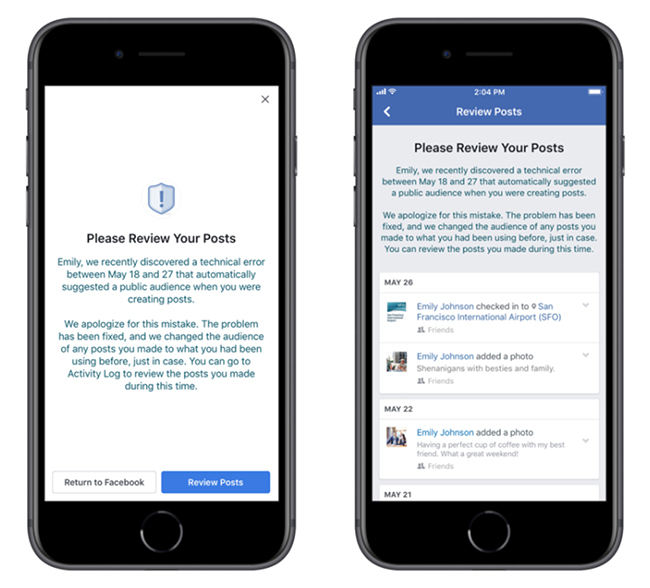 “Every time you share something on Facebook, we show you an audience selector so you can decide who gets to see the post. This is based on the people you shared with last time you posted,” Erin Egan, the company’s Chief Privacy officer explained.

“For example, if you choose to share a photo with friends only, your audience selector will automatically suggest you share to friends next time you start a post. If you shared something publicly last time, it will suggest public the time after.”

But due to a bug that occurred while building a new Facebook features, 14 million users the audience selector was automatically set on “public” during that time.

Users could have changed the setting at any time, but most users don’t check it and rely on it to be how they left it. Egan did not say how knew that the problem affected only those and not other users.

You might think that mistakes like this are likely not uncommon, but it’s interesting that Facebook acknowledged it relatively quickly and will be notifying affected users and prompting them to review the privacy settings of those posts.

This is especially notable when users, in situations like this one, are often left to wonder whether they committed the mistake and simply forgot about it.

Since the revelation that Cambridge Analytica got ahold of information of up to 87 million Facebook users and it not affecting the company’s worth negatively, it seems that Facebook is not so reluctant as before to admit mistakes or confirm potentially scandalous decisions and activities.

The company seems also to have realized that the truth, however unpalatable it might be, sounds better coming from them than from news outlets.