Did you know that nearly all modern color laser printers put tracking patterns of tiny yellow dots on each piece of paper they print?

Most printer manufacturers include these yellow dot patterns, which reveal information such as the serial number of the printer and the date and time when the document was printed. They are effectively invisible to the naked eye and they are ostensibly used to identify suspects in criminal counterfeit investigations.

But they can also be used to track down political dissenters or leakers.

Computer scientists Timo Richter and Stephan Escher from TU Dresden wanted to decode the various patterns and see whether they can mask them to effectively “anonymize” the printed document and, therefore, the person who printed it.

They analyzed documents printed by 141 printer models produced by 18 manufacturers, found the dots in most of them, and mapped four distinct tracking dot patterns/matrixes (TDMs), of which one was unknown to the public before this. 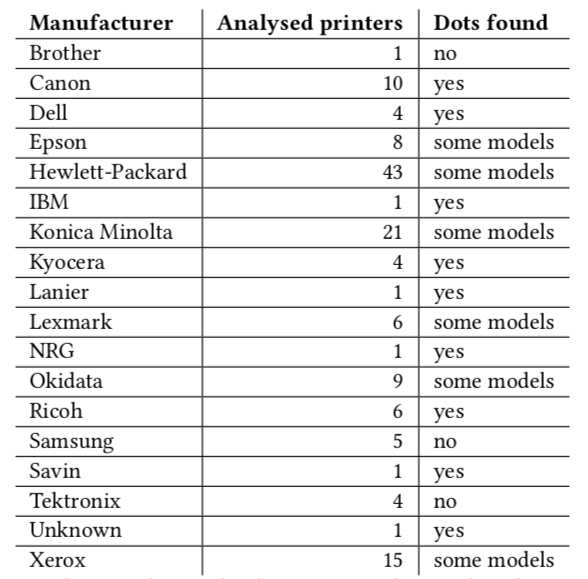 They also found a way to completely delete or mask the patterns in a way that don’t allow the pattern to be reconstructed.

“When scanned documents are being sent via the internet, they might contain tracking information. Tracking dots can mostly be removed from scans by clearing the original document’s empty areas,” the scientists TEXT explained.

For masking tracking dots on printed documents it’s best to add another custom TDM over the printer’s one, with the goal of making the decoding ambiguous.

Finally, they created and made available an app that automates the TDM extraction, analysis, and the creation and implementation of an anonymization pattern.

“We believe that citizens should be aware of the existence of such codes, and the surveillance that they make possible”, said Escher. “The GDPR governs the protection of digital data, but only few people know that they can be observed and identified also with non-digital media”.