A research team led by the EFF recently broke the code behind tiny tracking dots that some color laser printers secretly hide in every document.

The U.S. Secret Service admitted that the tracking information is part of a deal struck with selected color laser printer manufacturers, ostensibly to identify counterfeiters. However, the nature of the private information encoded in each document was not previously known. 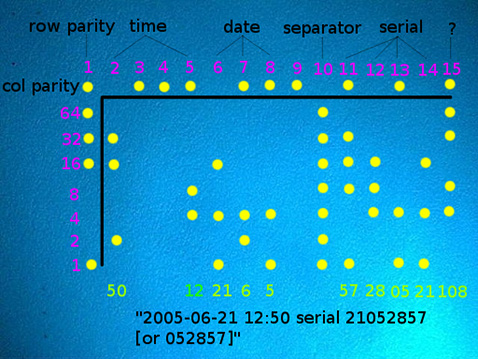 “We’ve found that the dots from at least one line of printers encode the date and time your document was printed, as well as the serial number of the printer,” said EFF Staff Technologist Seth David Schoen.

You can see the dots on color prints from machines made by Xerox, Canon, and other manufacturers. The dots are yellow, less than one millimeter in diameter, and are typically repeated over each page of a document. In order to see the pattern, you need a blue light, a magnifying glass, or a microscope (instructions on how to see the dots).

EFF and its partners began its project to break the printer code with the Xerox DocuColor line. Researchers Schoen, EFF intern Robert Lee, and volunteers Patrick Murphy and Joel Alwen compared dots from test pages sent in by EFF supporters, noting similarities and differences in their arrangement, and then found a simple way to read the pattern.

“So far, we’ve only broken the code for Xerox DocuColor printers,” said Schoen. “But we believe that other models from other manufacturers include the same personally identifiable information in their tracking dots.”

You can decode your own Xerox DocuColor prints using EFF’s automated program.

“Underground democracy movements that produce political or religious pamphlets and flyers, like the Russian samizdat of the 1980s, will always need the anonymity of simple paper documents, but this technology makes it easier for governments to find dissenters,” said EFF Senior Staff Attorney Lee Tien. “Even worse, it shows how the government and private industry make backroom deals to weaken our privacy by compromising everyday equipment like printers. The logical next question is: what other deals have been or are being made to ensure that our technology rats on us?”
More about
Share this