A new study from Juniper Research found that spending on IoT cybersecurity solutions is set to reach over $6 billion globally by 2023. It highlighted rapid growth, with spending by product and service providers (in consumer markets) and end-customers (in industrial and public services markets) to rise nearly 300% over the forecast period. 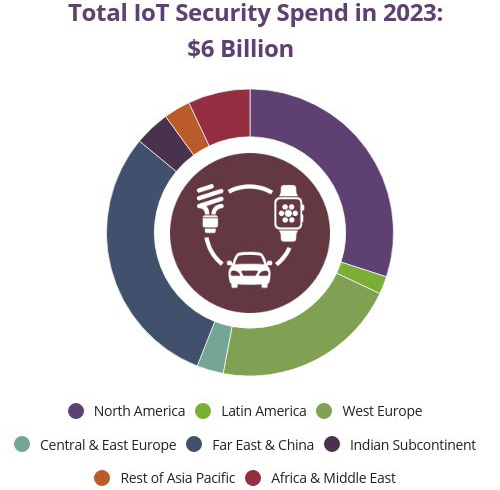 Juniper claimed that there are major differences in the way in which IoT business risk is perceived and perceptions on how regulation should be applied. It cited the home as an example of where poor long-term device support and little fear of ramifications in case of a breach would serve to keep spending low.

“The interconnected nature of the IoT means that even innocuous devices like the connected fridge can become a threat. Vendors see that risk as low, while little has been done from a regulatory perspective to protect consumers”, explained research author Steffen Sorrell.

As a result, Juniper forecasts that smart home IoT security spending would be less than 17% of the consumer market in 2023.

In contrast, the research identified glaring security issues in the smart energy market. However, it noted that strict minimum standards, such as those applied by Germany and the EU’s General Data Protection Regulation, would drive spending impetus, with IoT smart energy security spend reaching $1 billion annually in 2023.

The research forecasts that the rise of edge computing services to enable near-real-time IoT applications would present additional security challenges, which in turn will drive industry spend. It cited an increased attack surface as raising business risk.

Meanwhile, the need to ensure data reliability would emphasise the need for lifecycle management and device security solutions.